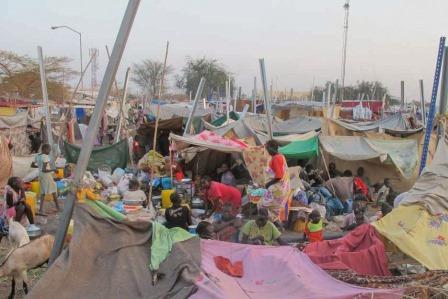 IDPs seek refuge in UN base in Malakal - [Photo by CARE]

The UN’s Protection of Civilians Site in Malakal has been reopened a day after reports of tension in the area, the Commissioner of police in Upper Nile state has said.

Yesterday, the POC was reportedly closed and displaced persons prevented from coming out following a protests by civilians outside the camp.

According Major General Chol Atem, this comes after the IDPs petitioned UNMISS over a move by Malakal Municipality to take sand from Akoka and Baliet, areas they say are outside its jurisdiction.

The municipality was reportedly trying to use the sand to rehabilitate internal roads within Malakal town.

However, the IDPs rejected the move, saying that the areas did not fall under the mandate of the Municipal Council.

In response to the petition letter, the civilians within the town took the streets saying the IDPs had no right to object to the move.

The Commissioner of Police in Makala town, Major General Chol Atem says the conflict has been addressed and the POCs is now open.

“It was resolved that, POC to be open and they have a chose to leave and enter, because the other party has been convinced that it has no right to close people inside the POC over land issue,” Chol told Eye Radio this morning.

Some of the IDPs who spoke to Eye Radio confirmed yesterday’s closure of the camp.

Although reopened, they are still afraid to go out to town.

“We were surprised yesterday by people who were protesting outside the POC. Some people came from Malakal town and protested and burn some tires. The gate was closed to prevent people from going outside because people were in fear because of the situation outside.” One of the IDPs told Eye Radio.

“The closure has affected us the IDPs economically, because our lives depend at activities outside the camp, like fishing and other stuff Authorities knowns the reason, but the civilians in POC don’t know, however, the community police in PoC are the one protecting the IDPs because civilians outside were protesting.” Another unnamed IDPs said.