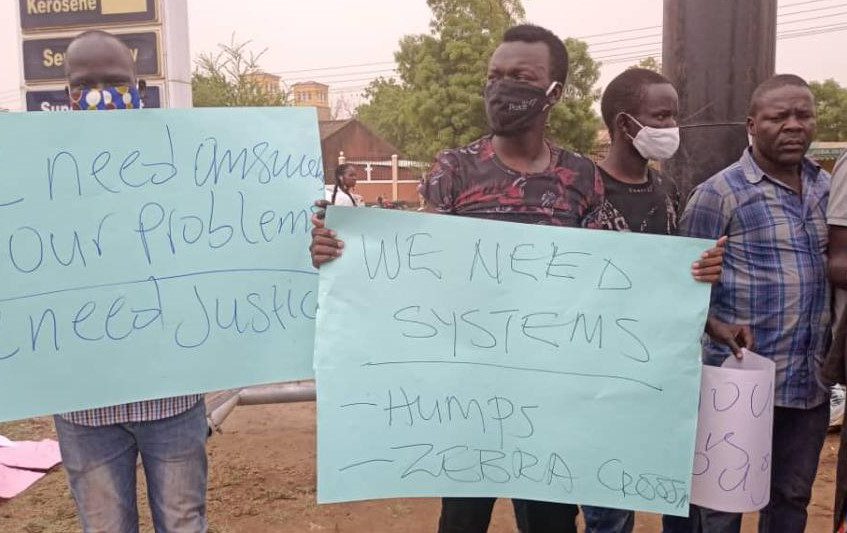 Some of the activists who protested against the death of Trisha C in Juba on Tuesday, March 30, 2021 | Credit | Eye Radio

The Mayor of Juba City Council has promised to meet the demands of protestors who took to the streets on Tuesday over the death of a musician and a boda-boda rider.

On Wednesday, the youth and activists presented a petition to the office of the mayor, demanding policy changes in traffic regulations, licensing of motorists, and provision of better health services.

They want all drivers to undergo serious scrutiny, and vehicles to be thoroughly checked for roadworthiness before being awarded licenses.

Other demands include regulating speed limits, construction of speed bumps and zebra crossing and traffic lights on all roads within the city.

The protestors particularly pointed out “reckless driving by the majority of water truck drivers” in Juba.

Reports reaching Eye Radio indicate that civil society activists: James David Kolok, Michael Wani, and Mannesah Mathiang have been taken by police for participating in a peaceful demonstration at the Mobil roundabout in Juba today. pic.twitter.com/GX2ohnEkLe

In response to the petition, Mayor Calisto Ladu promised to work with other government institutions to implement the demands.

He spoke to the media after a meeting with representatives of youth and activist this morning.

“We will work together with law enforcement agencies and the judiciary. Technically, will talk to traffic police through the ministry of interior to ensure that nobody is issued a license without undergoing driving school,” Ladu told the media after a meeting with youth and activist representatives.

On Monday, the renowned singer Trisha Cosmas died after getting involved in a gruesome road accident in Juba.

Eyewitnesses said a water tank driver lost control and ran over a boda-boda rider at Mobil Roundabout. The rider was carrying the late Trisha Cee.

Following the accident, activists, mourners and youths protested at the scene, where some of them were arrested.

They demanded justice and reforms within the Juba Teaching hospital, which they blamed for negligence. They were later released by the police.