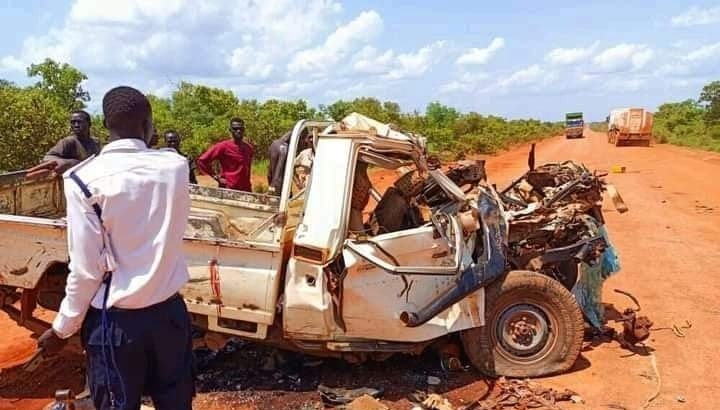 The pickup Landcruiser, which was carrying 16 people, lays in ruins on Wednesday, May 26, 2021 | Credit | Courtesy

At least eight people, including an infant, have been killed in a fatal road accident in Lakes State.

Nine others were also seriously injured in the Wednesday incident which occurred along the Rumbek- Yirol road.

Police report that the accident was a head-on collision between a pickup Landcruiser and a fuel tanker in an area called Alil.

The state police spokesperson said the incident happened on Wednesday between Yirol West and Awerial Counties.

“The two vehicles collided, leading to the death of eight people, including an infant; nine others were seriously wounded,” Capt. Elijah Mabor confirmed to Eye Radio.

The Landcruiser was carrying 16 people who were traveling from Awerial to Juba.

Capt. Mabor disclosed that the fuel tanker driver escaped the scene immediately after the accident.

He attributed the fatal accident to reckless driving.

“Both the cars were on speeding and the drivers couldn’t manage to control their vehicles, leading to the accident,” the spokesperson added.