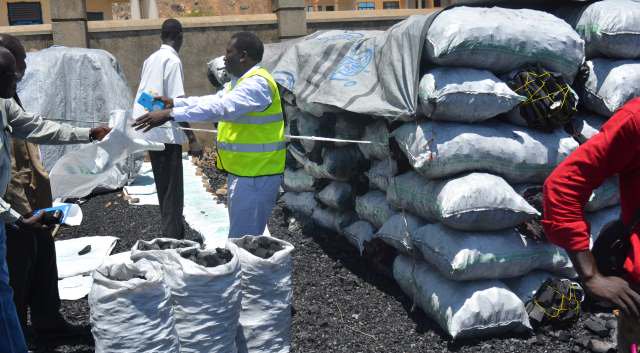 Charcoal for sale at Jebel market in Juba | File picture

An environmental researcher has called on the government to investigate illegal charcoal exports in the country.

According to the UN Environment Program, despite having one of Africa’s lowest population densities, the country’s forests remain under immense pressure from charcoal and fuelwood production and consumption.

In May 2015, the Ministry of Environment issued an order banning the illegal cutting of trees and exporting of logs and charcoal.

Nhial Tiitmamer, a researcher and director of the environment and natural resources program at the Sudd Institute think tank says despite the ban on charcoal exports, business persons continue to cut trees, burn them for charcoal, and export to other countries.

But Tiitmamer believes the charcoal business has largely remained unregulated.

“Some of the charcoal is put on the trailers and trucks that are returning to Uganda and Kenya and they [truckers] say ‘Oh. It is empty’ when asked,” he stated, citing reports from think-tank’s field agents.

He calls on the ministry to take the lead in preventing desertification across the country by bringing to book illegal charcoal exporters.

“The authorities should really double their efforts to detect those who are behind the illegal export,” Tiitmamer added.

Forests, according to the country’s constitution, are a national resource managed by the national government.

The 2018 State of the Environment Outlook Report, said fuelwood and charcoal account for over 80 percent of all wood used in South Sudan, with an annual deforestation rate estimated at between 1.5 and 2 percent.

However, local consumption is not the only threat, as rapid urbanization and demand from neighboring countries, including Sudan, Uganda, and the Middle East, also drive the market for charcoal.

In 2017, a bag of charcoal was sold at roughly 5 dollars, but the same bag sold at about 150 dollars in Dubai, according to environmentalists.

According to environmentalists, vast lands in South Sudan are being left empty by people cutting trees.