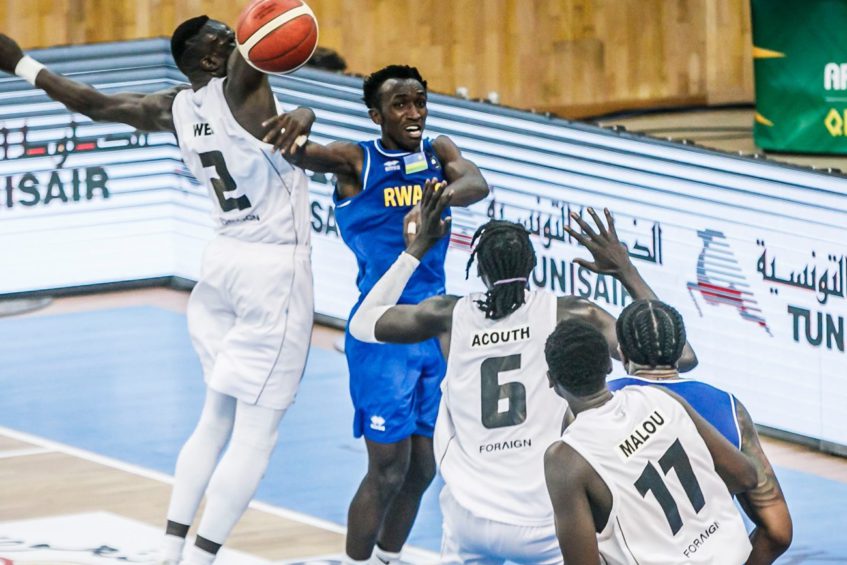 The game ended at 62-58 against South Sudan. Credit| FIBA AfroBasket

Despite the loss, the Bright Stars progressed to the final event to be hosted in Rwanda in August.

The Bright Stars made history after coming from a 15 point game to beat Mali in the last minutes of the fourth quarter in a tight contest on Thursday.

On Friday, a tight contest saw the South Sudan team lead Rwanda in the first and second quarter with 19-18 and 29-28 points -respectively.

At the restart, Rwanda got on top of their game and overpowered their East African counterpart by taking the third quarter to 43-38 points.

The Bright Star’ then come again from behind just like they did against Mali to level the points and the game was forced into a draw -ending the fourth quarter in a draw; 53-53 points.

The game then went into a final and deciding quarter where Rwandan got better of their opponents winning with 62-58 points when the final whistle went off.

Speakinwereer the game, the head coach Luol Deng said his team showed the “hunger to win the game but the opponents were more hungry” for the win.

“We are disappointed, we wanted to finish the right way, he said. “We faced a team that was hungry, they lost some games and they came out more hungry than us.”

On whether the win against Mali could have affected the performance of his team, Deng said “it was a great game against Mali but Rwanda was a better team in the game.”

“Yesterday’s game was great, I thought we fought hard, I thought the guys were great and everybody wanted to play but today I thought Rwanda were more coached and wanted to win more than us,” added Deng.

Coach Deng further said the biggest challenge for his team lies ahead. This, he said, requires working and preparing hard for the August tournament in Rwanda.

“We are proud of what we have done and we now just have to prepare for August and do our best.”

The team’s participation came after they failed to make it through from pre-qualifiers held in Nairobi in early 2020.

At the tournament, South Sudan lost to Cape Verde in their opening game and won against Chad.