South Sudan law practitioners have finally agreed to operate under one Bar association.

For the past years, the Bar Association of South Sudan had been divided over leadership wrangles.

His succession was disputed by some members of the Bar Association who felt that the election then was done in the absence of a neutral body and the general assembly.

However, a group of advocates who call themselves the senior advocates’ committee for reconciliation and unification of the profession say, it has now reconciled and united all the functions.

Monyluak Alor Kuol, the chairperson of the committee, told the media that the five groups have agreed to conduct a joint general assembly early next month.

Among the items agreed upon by the advocates are; suspend the issuing of licenses to trainee advocates by any party until the election of the new bar association, commit to unity and reconciliation among all advocates and enhance the professional harmony in South Sudan.

They also resolved to “convene the general assembly of licensed advocates to conduct a fair and free election of the new bar association.”

James el-Taib, who claimed to be the legitimate President of South Sudan Bar Association welcomed the unification.

“We are united persons under the leadership of our senior colleagues to achieve a specific goal -that is to conduct a joint general assembly meeting that will determine the way forward through the elections,” he said.

Issa Muzzamil who led the team that contested the control of the Bar Association with el-Taib said the private sector lawyers now have the opportunity reassemble a team that will not be disputed by any other party.

“When you abscond from the general assembly and a decision is made in your absence, you come back and create more problems or excuses, so this is one golden chance to all advocates to…put those disputes aside.”

According to the transitional constitution of South Sudan, advocates shall observe professional ethics, and promote, protect and advance the human rights and fundamental freedoms of citizens.

It adds that advocates shall serve to prevent injustice, defend the legal rights and interests of their clients, seek conciliation between adversaries and may render legal aid for the needy according to the law. 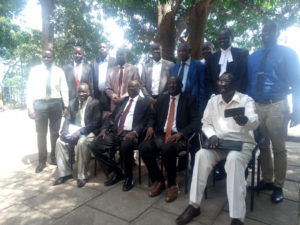