You are here: Home  |  Featured | News | Peace   |   SPLM-IG calls for teamwork in WBS, as governor Cleto and deputy fallout

SPLM-IG calls for teamwork in WBS, as governor Cleto and deputy fallout 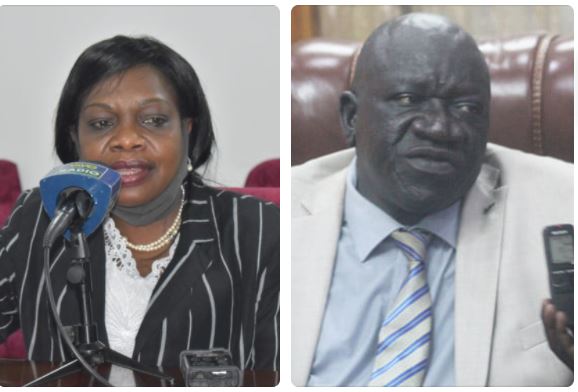 The SPLM has called for cooperation between the governor of Western Bahr el Ghazal state and her deputy following reports of internal wrangles.

Observers say there is a brewing conflict over the designation of roles and responsibilities within the executive branch of the state.

Governor Sarah Cleto Rial and her deputy Angelo Taban Biajo are said to have first differed over the appointment of a Mayor for Wau municipality.

The governor appointed Paulino Sayid Ukel from the SPLM IO.

The Deputy Governor is said to have then mobilized officials from the SPLM not to attend the swearing-in ceremony of the new mayor.

They also disagreed over the use of executive privileges such as vehicle, siren and state flag.

“Let us not fight over the seats, who is using the flag, what is the use of the flag in front of your car? It is just a piece of cloth, we need to deliver services to our community,” said Sarah Clato.

At the same event, the former Governor of Western Bahr el Ghazal state, Rizik Zackaria Hassan asked the two to respect their roles as per the state constitution.

He called for harmony in order to realize the aspirations of the people of the state through the revitalized peace deal.

“The governor is the governor with powers, the deputy has his powers too. Likewise to the advisors up to down but the governor has the right to remove somebody out through his committee, let take care of this, the governor has powers and this is going on,” Rizik Zackaria said.

For its part, the SPLM strongly advised the Deputy Governor to collaborate with Governor Cleto despite their political affiliations.

The party’s Secretary for Political Affairs and Mobilization, Santo Malik told Eye Radio that the focus of the two leaders should be to deliver services and implement the peace agreement.

He says he spoke to both the governor and deputy and asked them to cultivate teamwork.

“I told both of them to try to develop a teamwork spirit, work together for peace and development, the most important thing to put yourself as a leader of that state.” said the SPLM-IG party’s Secretary for Political Affairs and Mobilization.

“I talked to Angelo Biajo and told him to leave things as they are. Let the mayor be sworn-in let him take over his work. I also told Sarah if you want to do anything, call him. It’s just a matter of letting him not feel that he has been isolated and you have made a unilateral decision.”

For his part, the Deputy Governor, Angelo Taban said he was not out to cause trouble within the state government.

“I’m one of the people that cannot let down my people in any circumstance, that is not possible. This government has a constitution and the revitalize agreement which clearly stipulates everything,” Angelo Taban said.