You are here: Home  |  Education | Featured | National News   |   The abandoned schools of Kapoeta

The abandoned schools of Kapoeta 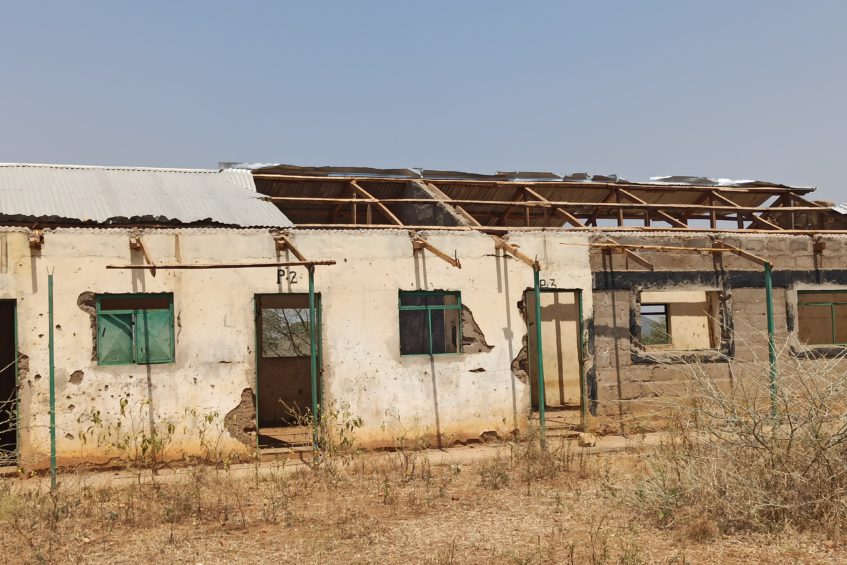 As primary 8 pupils sat for their final examinations early this month, many schools in the Greater Kapoeta areas in Eastern Equatoria state were empty.

The schools—many built permanently by the state government and some by non-governmental organizations were deserted long before the coronavirus pandemic struck.

Young people including 25-year-old James Lopir make money by mining gold at the bank of River Singaita in the Namurunyang area.

Every morning, Lopir leaves home wearing a pair of shorts, carrying a basin and a spade to dig for gold.

Lopir is surrounded by a dozen of other boys and girls—each panning in the dirty waters—looking for the precious metal.

Gold mining in this area, like in other parts of Greater Kapoeta is the main economic activity besides cattle keeping. 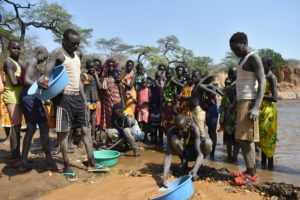 Children who are supposed to be in school make quick many out of the activity. As a result, many have abandoned schools.

But others like Lopir who are willing to be in schools, are forced out due to a lack of support from their parents.

For James Lopir, gold mining is now the only option for survival. He says he dropped out of Kapoeta Mixed Primary School last year when he was promoted to P.8.

“This work is better because you can get something out of it,” says 25-year-old Lopir who has now joined his fellows in Namurunyang to mine gold near river Singaita.

He says he gets money and buys food for his family when he sells the precious metal to local buyers.

“If you don’t get it today, it is still ok because tomorrow you might get some more. You will not get hungry and you will solve many issues. Also in school, there are many problems but when you finish, you will benefit. So they are the same,” he explained.

Lopir and his friends are among more than 2 million South Sudanese children at risk of missing out on education, according to UNICEF figures.

The General Education Act of 2012 requires basic education “must be free and compulsory” to all children in the country.

But another boy, 20-year-old Benson Lokopir says he was forcefully withdrawn from a school in Kenya in January this year to take care of cattle.

He leaves home every morning to walk after a herd of cattle in the thorny bushes of Namurunyang.

“I was in school in Lokolobie Primary School. My father brought me back last month to take care of the cattle. The time they brought me up to Lokichogio, I refused and quarreled with him. I said cannot go and stay just like that I have to go to school but he said no. I refused but he forced me to come,” Lokopir explained.

The school built concretely in the Eastern Equatoria State Governor Louis Lobong’s home village is one of those abandoned.

Across counties of the Greater Kapoeta area, many school structures have become bushy.

According to the former Undersecretary of the Ministry of General Education and Instructions, a mixture of factors are to blame for the abandoned schools.

Michael Lopuke Lotyam who hails from the greater Kapoeta area explains that some schools were deserted by teachers due to poor salaries.

Mr. Lopuke says to date, less than 1 percent of the Toposa population has attained formal education.

To change this, he suggests the national government considers an affirmative action to attract back teachers.

“It is the government of Eastern Equatoria State to see into it that how do they make deliberate actions to attract teachers into the area,” he suggests.

“The other thing is that not every Toposa is going for gold. But let us try to look into us the national and state government and see what opportunities can be created to have actions that can attract teachers into those particular areas.”

Teachers across the country have continued to complain of poor pay.

In October last year, some teachers told Eye Radio that they are paid a salary of less than 5 dollars per month.

Some of them have reportedly abandoned the profession and joined non-governmental organizations while others have resorted to manual jobs such as riding boda-boda to make ends meet.

In the 2019/2020 fiscal year budget, the education sector was allocated just six percent of the national budget.

Educationists blame the dwindling government support to the sector for its poor state.