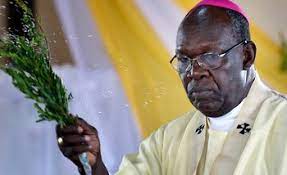 The body of the late Emeritus Archbishop Paulino Lukudu Loro will not be arriving in Juba today as earlier announced.

“Yesterday, information came to His Grace Stephen Ameyu, that the remains of His Grace Emeritus Paulino Lukudu Loro will not be arriving today Thursday, it will be coming Saturday morning hours,” said Father Maurice Felix, the Vicar-General of the Archdiocese of Juba.

“Then the burial will take place on Monday because there is a problem in Nairobi that we cannot make it. That’s why it is pushed to Saturday.”

Fr. Felix told Eye Radio that when the body arrives at Juba International Airport, it will be taken to St. Theresa Kator Cathedral where the requiem mass will take place.

The late Archbishop will be buried on Monday inside the Kator Cathedral Church.

“In the Roman Catholic Church all over the world, a Bishop who was in the seat of the Diocese is to be buried in the Church becomes he becomes a pillar of the church. So he is like one of the Apostles,” explained the Vicar.

According to earlier information, requiem mass and burial will be led by His Eminence Cardinal Zubeir Wako.

President Salva Kiir is expected to attend the event.

The late Archbishop died on Monday at a hospital in the Kenyan capital Nairobi after developing some health complications.