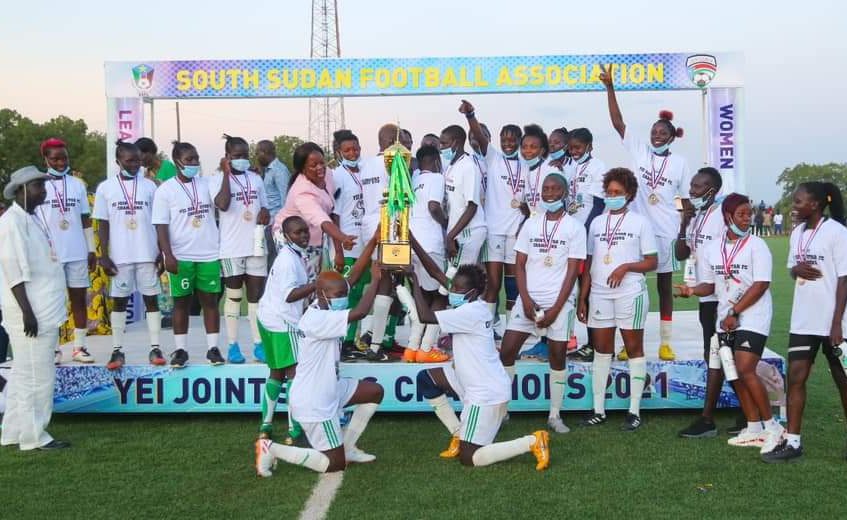 The Yei women team celebrate after being crowned champions/Photo: SSFA.

Yei Joint Stars have been crowned champions of the inaugural South Sudan National Women’s League after winning their last game in the tournament.

They beat Wau women’s team 4:0 on Saturday at Buluk training grounds in Juba.

The team from Yei County accumulated 33 points out of 14 games they played during the tournament.

They won 10 games and 3 games ended in a draw, losing one game against Wau team in Yei during the first round.

At the bottom of the standing, Wau women finished last with only 7 points after the team lost 11 games out of 14 games played, drawing in one and winning only two games.

Here are your leading scorers for the Inaugural South Sudan Women’s National League!

During the final game yesterday, thousands of Yei fans gathered at Buluk Training grounds to celebrate the achievement of their women’s team.

According to the secretary-general of the South Sudan Football Association, in addition to the tournament trophy, Yei Joint Stars will walk away with $3,000 around 1.5 million South Sudanese pounds.

The tournament was funded by FIFA through a project of women’s football. It is not yet clear if the tournament will be organized regularly in the coming years due to funds availability.

This year alone, South Sudan Football Association received $500,000 from FIFA only to improve women’s football in the country.