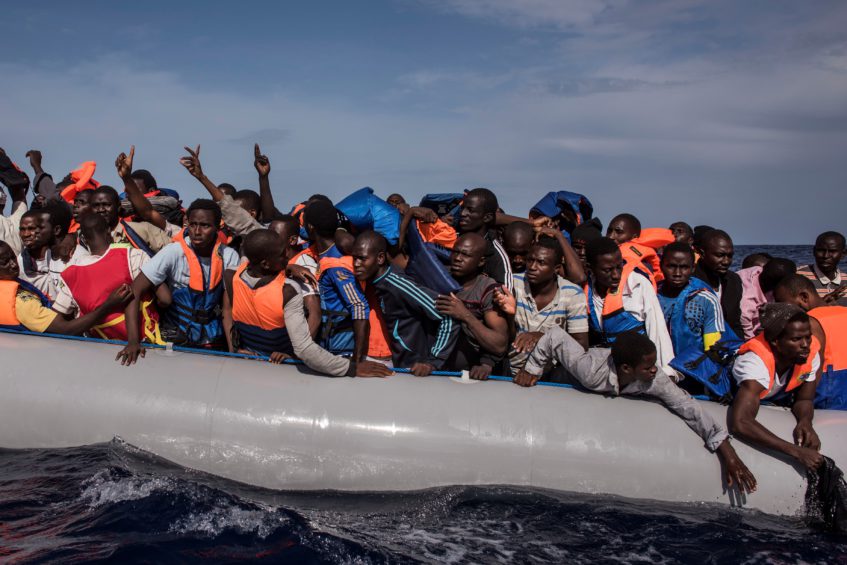 More than 100 refugees rescued by Italian sailors in the sea between Italy and Libya on Oct. 4, 2014. Photo credit: Courtesy

At least 50 South Sudanese immigrants have reportedly died in the Mediterranean Sea while attempting to cross into Europe.

This is according to a report released by the Sudanese government in Khartoum.

They are reported to have been part of 4,850 immigrants including, Sudanese, Ethiopians, Eritreans and other nationals abandoned by smugglers.

Achol Malong is a South Sudanese activist based in Khartoum.

She says the deceased are part of more than 1,350 South Sudanese immigrants that crossed to Italy last week.

They are allegedly between 15 and 35 years of age.

“They boarded a boat at Libyan coast, however their boat drowned in sea. About 50 South Sudanese have died and 280 are receiving treatment in Italian hospitals”, Achol Malong told Eye Radio this on Saturday from Khartoum.

An unknown number of people has also been reported missing after the boat they were travelling in sunk in the Mediterranean Sea.

Malong disclosed that more 285 who crossed successfully are receiving treatment in an Italian hospital.

However, Eye Radio could not independently verify the information.

In 2019, 600 South Sudanese refugees were reportedly held at the Sudan-Libya border after they tried to go on the “desperate journey”

Thousands of Africans have died trying to reach Europe via the Mediterranean Sea as they flee their countries due to conflict, human rights violations, persecution, and poverty.