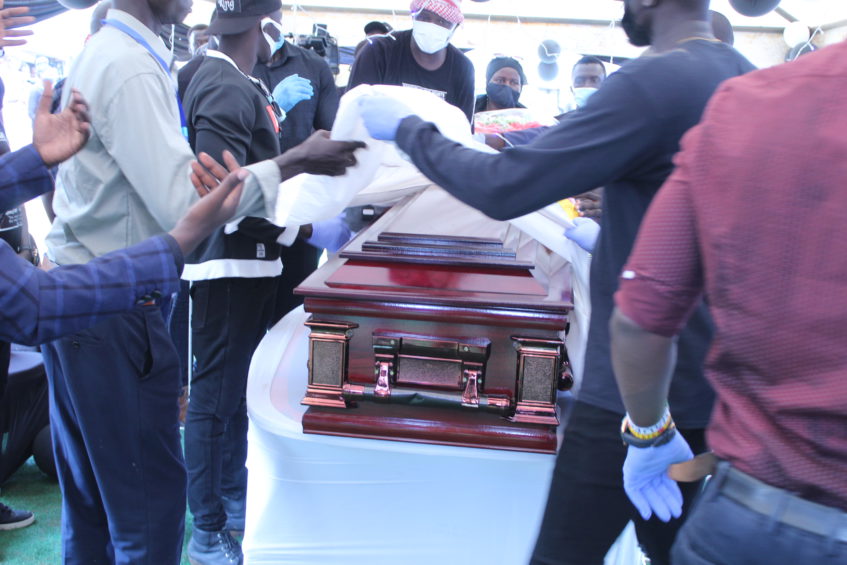 Musician Mantani's casket during the viewing of the body at Medan-Rembo in Juba on Tuesday, July 27, 2021 | Credit | Diko D. Andrew

The governor of Central Equatoria State has promised to support young people, especially those in the entertainment industry, to realize their dreams.

Emmanuel Adil made the remarks during the viewing of the body of late Murye Alex alias Mantani of the Hardlife Avenue Stars in Juba on Tuesday.

He encouraged the youths to remain hopeful in the peace agreement, nurture love and unity among themselves.

“This is the government of the young people and we must work for the youth in all aspects,” he told the mourners, majority of whom were young people. “We will do all things possible so that we can enable our artists build their dreams.”

For her part, the Minister of Environment and Forestry, Josephine Napwon encouraged those in the entertainment industry to nurture their own talents.

On Tuesday, South Sudanese music fans, relatives and well-wishers bid their farewell to the body of the late musician Mantani in Juba.

Mantani’s casket was brought into the country from Kampala on Monday evening.

During the procession to receive the body at Nesitu, along the Juba-Nimule road, hundreds of people including boda-boda riders escorted the body of the late up to the family home in Gudele 1.

Traffic on all major roads in Juba came to a standstill as the number of mourners and fans paraded the ambulance taking the body home for viewing the following day.

Nicky Prince, the leader of the Hardlife Avenue Stars, who is also the lead singer, appreciated the show of unity demonstrated by the fans following the death of Mantani.

He, however, asked that people should not only show their admiration for people once they are dead.

“This goes everyone not only to us – anyone whom you feel is making an impact in your life: Celebrate them when they are still alive so that they can see. Stop pretending and waiting until we die then you start showing love,” Prince stated.

Rapper Mantani of the Hardlife Avenue Stars succumbed to head injuries he sustained on Thursday last week in an accident in Moyo Town of Uganda.

He died after being referred to a hospital in Kampala from Lacor Hospital in Gulu.

Mantani, together with Nicky Prince and Linus, formed the most dynamic music trio in South Sudan.

They are popular for songs such ‘Lubelede,’ and ‘Yaude’ that won the MTN/Eye Radio Music Awards in 2014 and 2016, and the latest ‘Ana Yau Arif’, among other hit songs.

Mantani is expected to be buried at his home village in Kajo-keji County, Central Equatoria State.