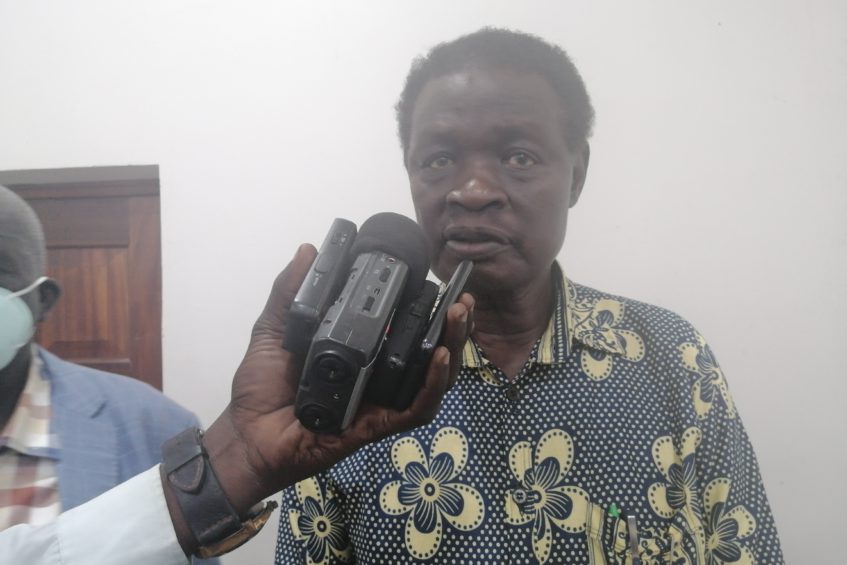 Stephen Wondu, the Auditor-General revealed in a report last week that over $50 million, part of 2% and 3% shares meant to be paid to oil-producing states was misappropriated/Joakino Francis/Eye Radio.

The Auditor-General has recommended the use of legal means to recover money illegally appropriated by the country’s finance bodies to individuals and other entities.

Last week, an audit report revealed that over $50 million, part of 2% and 3% shares meant to be paid to oil-producing states was misappropriated.

According to the petroleum management act, 2 % of net oil revenue goes to the producing state while 3% is for development projects in the producing communities.

But a report from the National Audit Chamber of South Sudan released on Wednesday, denotes that oil-producing areas of Ruweng Administrative Area, Upper Nile and the Unity States have been deprived of a sum of $50 million from 2011 to 2020.

Over $17 million was lost in just one year to unauthorized companies and entities.

Among the beneficiaries according to the report, are the Office of the President, the Ministry of Finance itself, South Supreme Airlines, and other companies.

Some individuals have not been identified.

The audit report shows that the individuals received letters of no objection from the Ministry of Finance and Planning in 2015 to withdraw the money from the central bank for unclear reasons.

Reacting to the exposure, a member of the Council of States, Nelson Lomatta, who studied the report says it is an indication there is unabated corruption in the country.

“If only 5% is played within their hands here and there, suppose the 95% of our revenue is audited, I think some of us will become mad because the way money is being used in this country is very strange,” Hon. Lomatta said last Wednesday.

“International communities put South Sudan on top of the most corrupt countries. This audit report explains that we are really corrupt, it is very unfortunate!”

Another member of the Council of States, Joseph Aban Deng, who represents Upper Nile state at the Upper House in Juba calls for prosecution of those identified as beneficiaries.

“We should identify the authorities who will have to look, investigate, and if possible, incriminate these people who did not deserve to get this money since 2011 up to now,” Hon Aban said.

In its recommendations, the report advised the “Council of States to prefer legal ways to enforce the recovery of illegal payments and expropriations.”

It also says the Council of State should use its authority to oblige the Ministry of Finance and Bank of South Sudan to disclose the identities of persons, including real owners of private corporations, who have received payments from the oil money meant for producing states and communities.

Other recommendations, among others, including putting a stop to the unauthorized transfer of petroleum-producing states without written authorization from the concerned state governors or administrators.

It also wants the finance ministry and the Bank of South Sudan to adhere to the Petroleum Management Act.