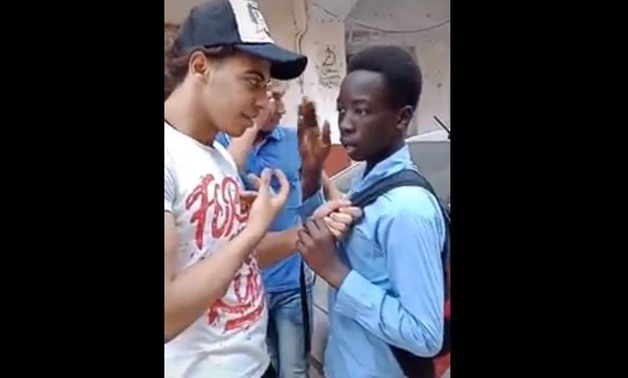 FILE PHOTO: Manut Chol One of South Sudanese, who was harassed by Egyptian boys recently.

A 13-year-old South Sudanese boy who was recently bullied by two Egyptian men in Cairo has described life in Egypt as unfavorable.

Last week, a video that has been widely shared on social media shows John Manut, a refugee student ridiculed and pushed around in Cairo.

The video also shows two young Egyptian boys, one of them named Sayed Hassan, verbally abusing and attempting to remove his school bag.

They sarcastically asked Manut to take “one beautiful photo” with them and refused to let him proceed to school.

The incident sparked a public outrage with social media users calling for the two Egyptians to be arrested for mockery and racism.

The police in Cairo confirmed that the two perpetrators including the person who captured the video had been arrested and are yet to be charged.

Speaking to Eye Radio from Cairo, John Manut said he has been through other countless forms of harassment because of his color.

He said he hopes to return to South Sudan once total peace is restored.

“I would like to tell our leaders that we need peace, we need to be united, because the South Sudanese who are here in Egypt are not completely safe here. There is no justice for us,” said the 5th Grader at Charles Lowanga Primary School in Cairo.

A few days later, the two Egyptian caught up with Manut and apologized to him via a Facebook video.

South Sudanese refugees in Egypt have been complaining of harassment and racism there.

Recently, a South Sudan young man who had just graduated with a law degree there died after he was reportedly maliciously injected with a harmful substance.

Early this year, a South Sudanese boy whose right hand was accidentally cut off in a shoe factory in the Egyptian capital, says his employer forced him to operate the machine.