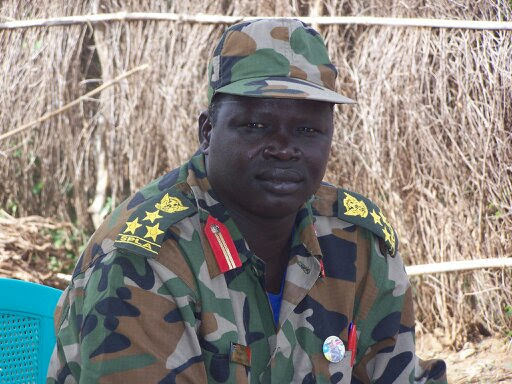 The Office of the President has ordered for release of Stephen Buay, the former military leader who was stripped of ranks and dismissed from the army recently.

Early this year, Buay was charged with treason, rebellion, and offenses during operations, disobedience of lawful orders and violation of standing orders according to articles 61, 67 and 69 of the SPLA Act, 2009.

In August, a military court found him guilty as charged, and stripped of ranks and dismissed him from the army and sentenced him to a year in jail.

This was protested by his lawyer Philip Anyang, who appealed to President Salva Kiir to finalize the case – citing a deteriorating health condition for his client.

In a letter dated 14 November 2019 that that Eye Radio saw on Wednesday, the Office of the President confirmed the verdict, but released Buay.

“H.E the President has confirmed the verdict of the GCM [General Court Martial] in totality and he has further directed that the convict should be released forthwith,” wrote Majok Mading Majok, head of legal administration in the Office of the President.

Buay was cashiered in a ceremony held at the army headquarters in Juba on Wednesday morning. Anyang described it as disgraceful discharge from the army.

Maj.-Gen. Buay had often argued that his arrest and detention was politically motivated.

He told the court earlier that the charges were manufactured by military and community leaders who allegedly have personal problems with him dating back to the 1990s.

At some point during the trial, his defense lawyers threatened to pull out from the court proceedings because they said it was a mock trial.