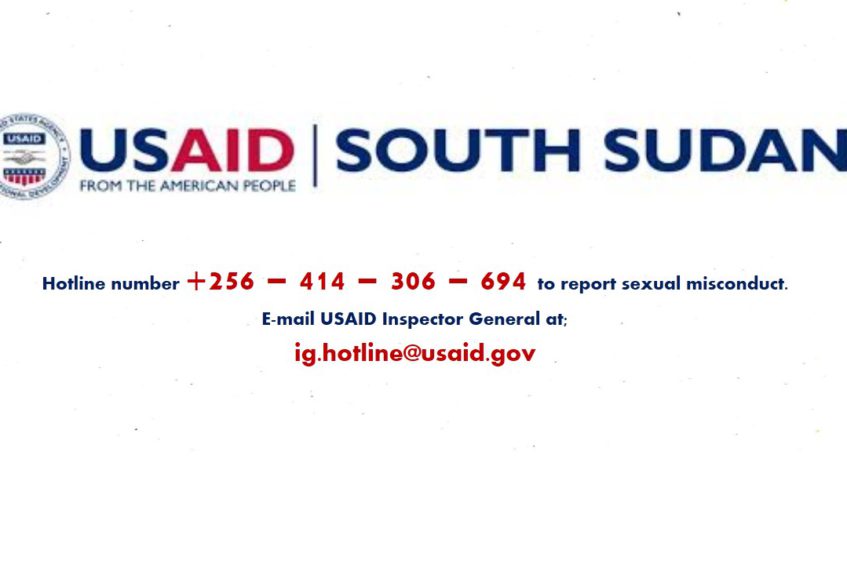 The USAID has established a hotline number that can be used to report incidents of gender-based violence in projects that it is funding.

In February 2018, a scandal-hit British charity Oxfam after claims of sexual assault and cover-up were reported in South Sudan.

UNMISS was also in the spotlight after Ghanaian police unit in Wau were accused of sexually exploiting women and girls at the Protection of Civilians site.

USAID recently said gender-based violence does more than endanger welfare because it also costs the world more than 5 per cent of the global gross domestic product.

“We do not want to see our partners victimizing people in South Sudan,” USAID Mission Director in South Sudan, Leslie Reed, said on Eye Radio’s Dawn.

The organization that is responsible for administering civilian foreign aid and development assistance said it is working to reduce barriers that prevent women from reaching their full potential.

Reed called on South Sudanese to report any USAID-funded organization that may be engaged in sexual misconduct.

“If you see one of our partners doing something whether it is misusing funds, whether it is harassing local people, we invite you to call out hotline or to send us an email,” she stressed.

She said individuals can also send an e-mail containing allegations of sexual misconduct to USAID Inspector General at; [email protected]

USAID is the largest humanitarian and development partner in South Sudan.

Partners that USAID funds include; UNICEF, WFP, IOM, CARE and World Vision, among others.

The efforts were to ensure the agency prohibits sexual misconduct, including harassment, exploitation or abuse of any kind among staff, implementing partners, or program beneficiaries.

It affirmed USAID commitment to take necessary and appropriate steps to prevent and address sexual misconduct within its workforce and programs, while also taking into account survivor needs.