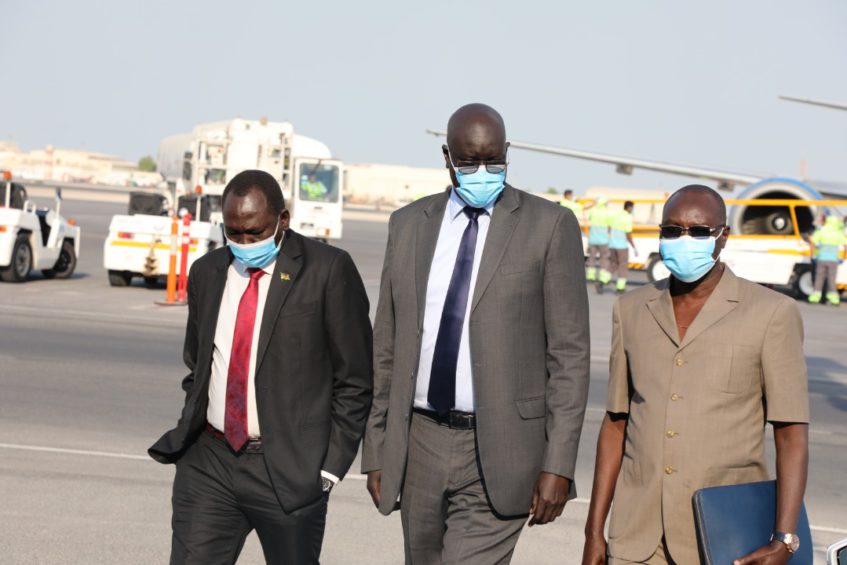 The Minister of investment Dhieu Mathok [Left], and Minister of Foreign Affairs and International Cooperation, Mayiik Ayii [Center] who tested positive for Covid-19 where in Doha as part of government advance team expected to have been preceded by President Salva Kiir - courtesy

The minister of investment Dhieu Mathok has joined Foreign Affairs Minister in quarantine after testing positive for Covid-19 in Doha, Qatar, the Minister of Information has said.

Dhieu becomes the second senior government official who tested positive for the virus in Doha.

On Sunday, Mayiik Ayii tested positive for Covid-19 in the Gulf country after leaving for Doha in an advance team expected to have been preceded by President Salva Kiir.

The positive results of the two ministers have forced both to undergo a mandatory 14-days quarantine in Qatar.

Michael Makuei says a section of the delegation including the head of the advance team, Tut Gatluak have returned to the country.

He stated that all those who reverted from the mission have tested negative for the novel coronavirus are expected to resume official duties on Monday.

Makuei has confirmed to Eye Radio that Dhieu Mathok became the second government official to be tested positive for Covid-19 in Doha.

“They are still there because they have been diagnosed positive and the rest were contact persons, they have come back and they have been tested and at least they have been told to go to their houses, and probably on Monday they will report to the offices,” Michael Makuei told Eye Radio.

The high-level government delegation arrived in Doha last weekend on Sunday and was to hold meetings with the Qatari government, ahead of President Kiir’s first-ever working visit to the Gulf country.

The two countries were expected to discuss bilateral relations, which include peace, security, economy, trade and infrastructure.

But were canceled due to the positive results of covid-19.

The delegation – which was headed up by the Presidential Advisor on Security Affairs, Tut Gatluak – comprises the ministers of foreign affairs, finance, investment, roads and bridges, higher education, and agriculture.

Others are the governor of the central bank, managing director of the state oil firm Nilepet and secretary-general of Islamic affairs.