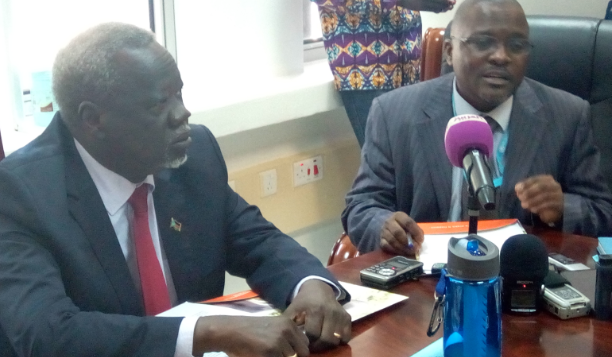 Anyone who reports a guinea worm case will get a cash reward of 25,000 pounds, says the Ministry of Health.

This comes after the declaration of the outbreak of the disease in Western Lakes on Monday, barely 4 months after South Sudan was declared guinea worm-free.

Health Minister Dr. Riek Gai said the campaign under the theme: “It Pays to Report Guinea Worm,” seeks to motivate and inspire people to take action to protect themselves and their communities from Guinea worm infection and spread.

“The strategy of cash reward has also held fruits. It is working because it is that strategy that made people to report thousands of cases on monthly basis,” he said.

Dr. Riek Gai, the Minister of Health said whoever reports will be awarded 50,000 pounds if it is a contained guinea worm case.

For uncontained case, the reporter will get 25,000 pounds and a guinea worm victim will get 10,000 pounds.

Dr Riek added that the reporter and a victim will be immediately awarded cash after laboratory confirmation.

“We are going to continue or maybe we can even increase the cash reward so that we intensify the search for all the cases and not only in Western Lake state but across all the country,” he added.

Guinea worm disease is a parasitic infection caused by a nematode roundworm parasite.

It is contracted when people consume water from stagnant sources contaminated with Guinea worm larvae.