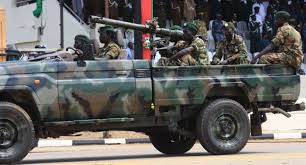 File: SSPDF soldiers exhibit arsenals in a past event.

A political analyst has criticized the government for saying it does not have money to implement the peace deal.

Abraham Awolic who is the Acting Executive Director of the Sudd Institute, a think tank based in Juba, said this.

“Personally, I think that South Sudan obviously is broke. We don’t have money, but if we can finance war we can finance peace. That is the bottom line.”

The incumbent transitional government of national unity has been saying that it is too broke to fund the pact.

As a result, it asked the international community to financially support the accord which is expected to end the suffering of the people.

A recent UN reports showed that the government of South Sudan was spending its oil revenue on weapons, making the Security Council impose arms embargo on Juba last year.

“Wherever we use to get the money to buy the bullets, let’s get the same money to implement the peace agreement,” Awolic said.

This excuse to him, is unacceptable. “The excuse that we don’t have the money and therefore we cannot have peace is not acceptable to me.”

Recently, the minister of information – Michal Makuei – announced that the government would cut from every civil servant an amount equivalent to a day’s pay, sparking public outcry.

This to Mr. Awolic, is also inappropriate.

“I don’t think it is acceptable to any citizen in this country. If we don’t have money, you ask us for money.”

Abraham Awolic spoke in Juba on Thursday during a high-level panel discussion under the theme: “Catalyst for Change: The Role of Women in South Sudan’s Peace Process.”

The forum was organized by the UN mission in South Sudan and the Catholic University of South Sudan.