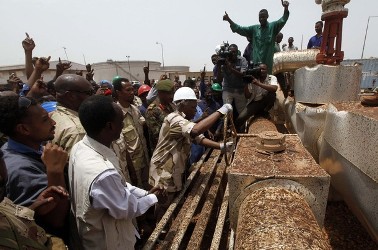 The Minister of Petroleum and his Sudanese counterpart, have agreed that Sudan will provide materials and technical support for the resumption of oil production in South Sudan.

This come as talks begun in Khartoum yesterday on ways to resume production in the different oil fields in South Sudan.

Over the weekend, the Sudanese Foreign Affairs Minister said a joint plan to implement an increased oil production was underway.

Sudanese media, say the two countries’ discussion focused on the re-production of oil in the fields of former Unity state. The technical teams from both sides are also expected to visit the oil fields to assess ways to resume production.

According to Sudan News Agency, SUNA, the talks focused on resuming production in the areas that were destroyed by the Heglig war in 2012.

Yesterday, the two ministers held a high level discussions aimed at resuming and increasing oil productions in blocks 1, 2, and 4 in the former Unity state, and also continuing production at block A5.

They also agreed to draw up a track for transporting the materials used at the oil fields.

The oil fields include; Tom, Al- Naar, Moga, Unity and Tharjath in former Unity state and increasing the oil production in Paloch.

In September last year, Juba and Khartoum signed a deal to reopen direct trade along the border and increase oil production that were closed down after the two countries clashed over in Heglig in 2012.