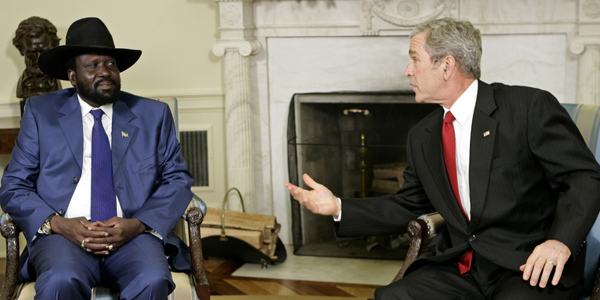 George W. Bush meets with the then FVP of Sudan and President of Southern Sudan Salva Kiir, January 5, 2009 | Reuters.

The Presidential Advisor on Legal Affairs has admitted that the Trump administration and South Sudan government have rocky diplomatic ties.

The US has played a key role in the South Sudan’s long journey to independence.

Under the administration of George W Bush, the US brokered the 2005 peace accord which resulted in separation from the Sudan in 2011.

Earlier this year, US Ambassador to the United Nations Nikki Haley described President Salva Kiir as ‘unfit’ after accusing the government of failing to put the best interests of the South Sudanese as its priority.

The accusations were vehemently rejected by the government.

But Legal Advisor Lawrence Korbandy says the government is now ready to smooth the diplomatic ties with the US.

“South Sudan will exert more efforts to remove any obstacles or challenges that may hinder or affect our diplomatic ties with the USA as equals,” Korbandy said during the celebration of US Independence Day at the US ambassador’s residence in Juba on Tuesday.

“Now South Sudan is more determined to cement its diplomatic ties with the US, devise new ways and mechanisms for doing business with the US.”

Through its humanitarian arm – USAID – the US has been supporting South Sudan, providing aid assistance, conflict mitigation assistance, essential services such as health care and education.