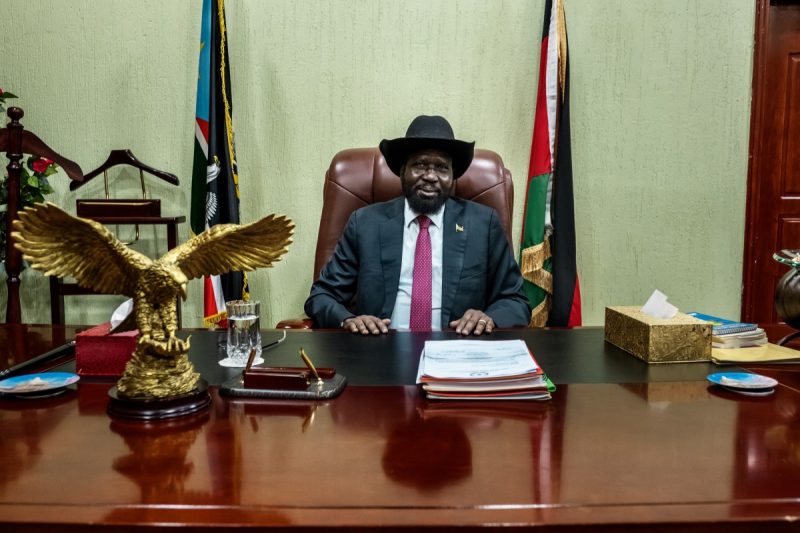 President Salva Kiir has just issued series of republican decrees dismissing and appointing senior officials in his office and the national security sector.

He dismissed Nhial Deng Nhial as Minister of Presidential Affairs and appointed Dr. Barnaba Marial as the replacement.

Dr. Barnaba Marial was Southern Sudan’s first Minister of Regional Cooperation, an equivalent of foreign affairs, then moved to the Ministry of Commerce and Industry before the independence in 2011.

He has held various positions in the Cabinet of South Sudan since independence in 2005, including State Minister of International Cooperation in Khartoum. He was the information minister from 2010 to 2013.

On July 27, 2013, he was appointed Minister of Foreign Affairs and International Cooperation, leaving the docket of Information to Michael Makuei Lueth.

Marial was removed from his position as minister of foreign affairs in March 2016, days after a document sent to the United Nations in Geneva, referred to former minister Dr Luka Biong Deng, who hails from Abyei, as a citizen of the Republic of Sudan.

He spent the next three years as a member of the national parliament representing Uror County of Jonglei state.

In August 2019, President Salva Kiir reappointed Marial into government by making him a Presidential Adviser and Special Envoy.

He has since been leading a government delegation in talks with three opposition holdout groups on peace in the country organized by the Roman Catholic Sant’ Egidio peace group.

Marial’s mission is to support an inclusive peace agreement in South Sudan by persuading the holdout groups to join the revitalized peace deal signed in September 2018.

Kiir also relieved General Johnson Juma Okot and assigned him as grade one Ambassador to Belgium.

General JJ Okot, as he is popularly known, was appointed in May last year replacing General Gabriel Jok Riak. Before becoming the CoDF, JJ Okot was the Deputy Chief of Defense Forces.

During the liberation struggle, JJ Okot was a platoon commander and Chief of Staff of Eastern Equatoria Command in 1987 until 1991. He also served as deputy governor of Greater Equatoria from 2002-2002.

He was the first senior military officer from the Equatoria region to hold the Chief of Defense Forces position in Bilpam since South Sudan’s independence in 2011.

In February 2016, JJ Okot was removed from his command position over a role he allegedly played in a financial scandal.

Leaked documents showed JJ Okot used SSP 235, 000 to pay for accumulated unpaid taxes, which his private company, Africana I Wire Enterprises allegedly failed to pay to the government as a legal requirement for all registered companies.

Sources in Bilpam also said he allegedly used salaries of the soldiers for personal businesses and failing to pay back, a claim JJ Okot has not publicly commented on.

In 2017, Kiir appointed him the SPLA Deputy Commander of Ground Forces, then elevated him to the rank of Lieutenant General at the position of SSPDF Deputy Chief of General Staff.

The same year, the U.S-based The Sentry report accused JJ Okot of misappropriating money intended to fund food rations for his troops in Equatoria region, leaving them to loot as a means to sustain themselves.

Then in May 2017, the Human Rights Watch accused then Lt.Gen. JJ Okot and 8 other government and SPLA-IO commanders of killing, rape and forced displacement of civilians in the Greater Equatorial region.

It alleges that Johnson Juma Okot, who was in charge of commanding government forces in Eastern Equatoria and Johnson Olony, who commands rebel forces in the Upper Nile region committed serious abuses against civilians.

He will now represent South Sudan in Belgium.

Before his appointment to the headquarters in Bilpam, Gen. Santino, in 2017, was the commander of SPLA Division 3 in Northern Bahr el Ghazal state.

In December 2017, President Kiir appointed him as the Commander of SSPDF Ground Forces.

However, earlier in 2014, the U.S. Treasury Department had placed sanctions on Santino Deng Wol for leading and directing military action against opposition forces in an act that expanded and extended the conflict. He was sanctioned along with then SPLA-IO’s military governor for Unity state, General James Koang Chuol.

In 2015, the U.N. Security Council also imposed travel bans and asset freezes on Santino, and the former head of Tiger Division, General Marial Chanuong and General Gabriel Jok Riak, who was then the SPLA Sector One commander.

The UN particularly accused Gen. Santino of having commanded troops who killed children, women and old men during a 2015 offensive in South Sudan.

He will now be the third most powerful military leader in South Sudan after the Commander-in-Chief and the Minister of Defense, Angelina Teny.

It blocked the individuals’ and entities’ assets within U.S. jurisdiction and prohibited any U.S. persons from engaging in transactions with them.

Then in February July 2018,  Malek was sanctioned by the UN and the European for his “actions or policies that threaten the peace, security or stability of South Sudan.”

The Security Council accuses him of engaging in “actions or policies that have the purpose or effect of expanding or extending the conflict in South Sudan.”

Despite the sanctions by the UN, United States and the European Union, Malek Reuben was appointed by Kiir as Deputy Minister of Defense in September 2018.

He will now represent the country in Eritrea, an IGAD nation.

In January 2013, the Major General Chol Thon was promoted to the rank of Lieutenant General and appointed the SPLA Deputy Chief of Staff for Moral Orientation.

On December, 2015, General Chol Thon was removed from the army to replace Simon Kun Puoc who was governor of Upper Nile State.

When the 28 States were established, he became the governor of Eastern Nile State until the state was further divided into central and northern Upper Nile.

In January 2017, Kiir removed Chol Thon from the governorship position, and October 2017, he reinstated him into active military service with the same rank as 1st Lieutenant General.

In October 2020, Kiir appointed him the Deputy Chief of Defense Forces

In the the decree read Saturday night on state television, Kiir promoted the Director-General of Internal Security Bureau, National Security Service Akol Khor Kuc to the rank of First Lieutenant General. He maintained his position.

General Thomas Duoth Guet was relieved from the position of Director-General of the General Intelligence Bureau, NSS and replaced by Major General Simon Yien Makuac. Kiir then assigned Gen. Duoth to Kuwait as Grade 1 Ambassador.

The Human Rights Watch also said it documented reports of General Intelligence Bureau committing numerous abuses, including arbitrary arrests, detentions, and ill-treatment of detainees, enforced disappearances, killings, and violations of freedoms of expression and assembly and privacy rights, among others.