Machar envisions an end to the war 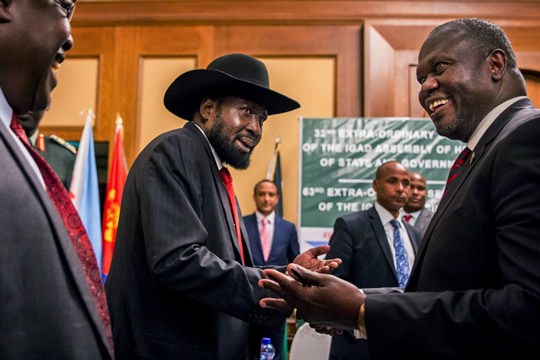 The leader of the SPLM-IO, Dr. Riek Machar has said the agreement on the declaration of a permanent ceasefire will silence the guns in South Sudan within the next three days.

This month, Dr Riek Machar accepted a meeting President Salva Kiir after IGAD Council of Ministers proposed the meeting to be held in Addis Ababa.

The initiative was first brought up by the Kenyan former Prime Minister, Raila Odinga who met both President Salva Kiir in Juba, and Dr. Riek Machar in South Africa in separate occasions.

Raila’s push was for a similar initiative his country describes as a “handshake between two leaders to creating a bridge.”

Riek Machar arrived in Khartoum on Sunday, ahead of President Kiir for their second phase of face-to-face meeting.

After two days of engagement under the auspices of Sudanese President Omar Hassan El-Bashir, Machar and Kiir endorsed the Declaration of the Ceasefire agreement.

The agreement was also signed by leaders of other political parties, such as the Former Detainees, and the South Sudan Opposition Alliance.

While delivering his remarks after signing the document, Dr. Machar expressed optimism that the agreement will finally bring an end to the violence.

“This agreement has a lot of meanings; first the war should come to an end by this Declaration of Ceasefire. I believe this agreement will make us work very quickly so that we can agree on the outstanding issues in the IGAD Bridging Proposal,” said Machar.

He added that the agreement will also build confidence between Sudan and South Sudan because of Khartoum’s involvement in mediating peace.

“The fact that North Sudan can assist South Sudan to become peaceful and stable, and to revitalize its economy, it is something that is cherished,” he said.

Dr. Machar also said that his expectations is for the agreement just signed to quickly lead to the full endorsement of a Comprehensive agreement based on the IGAD’s Bridging Proposal.

“We have so many displaced. Life is not that easy when you are a refugee, similarly for those who have sought refuge in the UN camps; I believe that this agreement will take them back home,” Machar added.