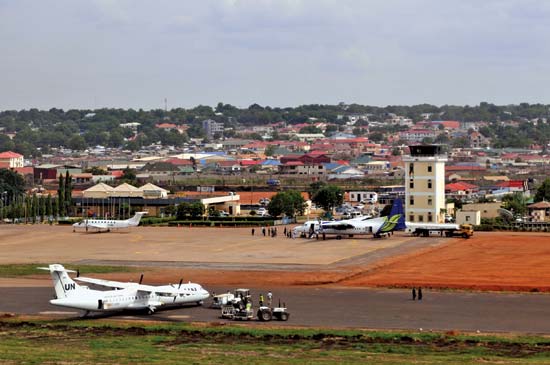 The director of Juba International Airport says only flights that directly fly over Sudan’s territory have been affected by the ongoing protests.

Kur Koul Ajieu is clarifying reports that operations at JIA have come to stand still due to the unrest in the Sudan.

The news that the airport could not function because South Sudan’s airspace is controlled by Sudan has widely been circulate on social media.

According to Mr. Kuol, only Egyptian and fly Dubai airlines have been affected.

‘Only flight Dubai and Egypt that are passing through airspace of Sudan are the only planes that did not come to juba yesterday,” he said.

But airlines from the neighboring Kenya, Rwanda and Ethiopia have been landing and taking off the airport.

“Kenya airways, Rwanda airlines, Ethiopia airlines and flight 540 from Kenya are not passing through the air space of Sudan, they came,’ he explains more.

He said that President Salva Kiir and the delegates that went to Rome for the two-day retreat are due to arrive later this afternoon.