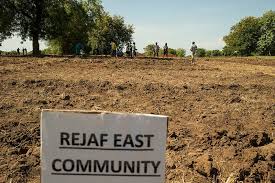 Traditional leaders in Rajaf Payam in Juba have petitioned the Central Equatoria State governor over what they describe as persistent incidents of land grabbing and insecurity in the area.

The chiefs say pieces of land in seven Bomas under the Payam have been illegally acquired by government and military officials, including private individuals and companies.

In a letter dated February 10th, 2021, the chiefs argued that these areas have witnessed a systematic and persistent land grabbing, insecurity, child abduction and cattle herders.

They also say armed individuals, some of whom are top military officers have encroached on private and community lands.

The traditional leaders stated that the illegal activities have disrupted the livelihoods of the inhabitants as well as causing disposition of their ancestral land.

They also say the road from Lungi to Gwu’duge village and the Juba-Bor highway have been constructed on traditional farmlands ­­­-without their consultation.

This, they say has deprived the locals from free movement, access to farm lands and burial of their love ones.

The traditional leaders outlined six demands to the state governor to address the matter.

These include; immediate suspension of the road construction, relocation of cattle herders to their place of origin and transfer of military personnel from the area, among others.

When contacted on the matter, the spokesperson in the office of the governor confirmed receipt of the petition.

“The chiefs met the deputy governor and…I think soon –once the government is fully formed…a drastic measure will be taken to holistically address the issue of land grabbing that has become predominately an issue in the state,” Derick Derickson told Eye Radio.

“A drastic measure will be taken against those defying the order by the governor,” Derick added.