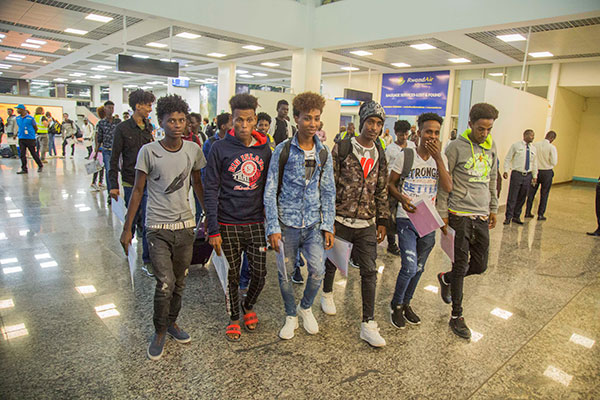 The first batch of the 500 African refuges and asylum seekers from Libya arrive at Kigali International Airport on September 26, 2019. Photo | Cyril Ndegeya | NMG

A young South Sudanese who has been stranded in Libya since 2016 says he is likely to be transferred to a new home in Rwanda.

David Apai Yasona says the Rwandan government has approached him over his condition in the coastal region.

Apai left South Sudan three years ago in an attempt to go to Europe.

But he was reportedly taken into custody by smugglers and later by the Libyan military authorities.

Apai reportedly did lose his passport in Libya and has for years sought help from the government of South Sudan to get him out of the war zone, in vain.

Last month, following reports by Eye Radio, the Ministry of Foreign Affairs said it was working in collaboration with the embassies of Egypt, Sudan and Nigeria to get Apai and 57 other South Sudanese out of Libya.

He said since then, Juba has ‘not updated me on what is going on”.

“The IOM said they cannot help me at the moment but they have forwarded the case to the Rwandan Ambassador to follow up the repatriation,” Apai told Eye Radio on Monday.

In September, Rwanda, the UN refugee agency, and the African Union announced plans to evacuate hundreds of African migrants being held in Libyan detention centers.