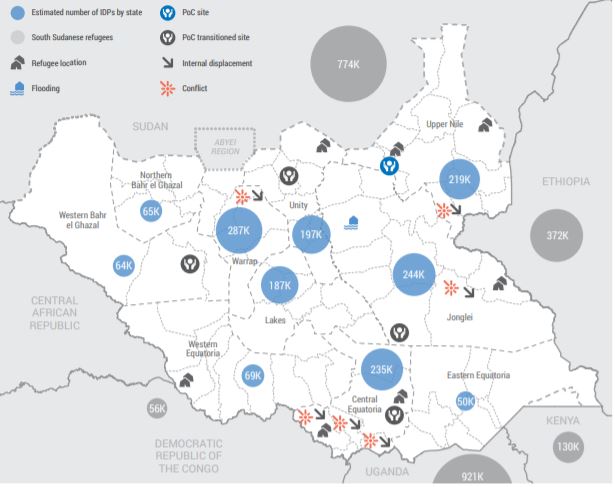 The month of May has been characterized by high levels of food insecurity, violence, and cattle raids in South Sudan, a new report by the UN states.

8.3 million people are still in need of food, while 7.2 million others will remain acutely food insecure from April to July 2021.

In its monthly snapshot, the UN Office for the Coordination of Humanitarian Affairs revealed that sub-national violence temporarily displaced an estimated 20,000 people in the Greater Pibor Administrative Area.

It said people’s homes and humanitarian facilities were looted and burnt down, including warehouses of relief commodities in May.

It further disclosed that some 8,700 people, mainly elderly and very vulnerable people, remain displaced in Pibor.

In its May snapshot, the UN body also said fighting between armed forces and clashes between cattle keepers and host communities in Lainya, Kajo-keji, and Yei River counties of Central Equatoria continued.

According to the mini-report, an estimated 8,000 people fled attacks by armed cattle keepers in Lainya, and further impacting humanitarian activities.

Meanwhile, in Ulang County of Upper Nile state, the UN said sub-national violence resulted in the displacement of people and looting of humanitarian supplies.

It also reported that 31,000 people were displaced to Ayod town by floods in Ayod County of Jonglei state.

This is following the attack by suspected armed youth from neighboring Mayom County of Unity state.

The UN OCHA concluded that the humanitarian crisis triggered by the legacy of civil war and chronic underdevelopment continues on a costly trajectory for South Sudan’s people and their outlook on the future.