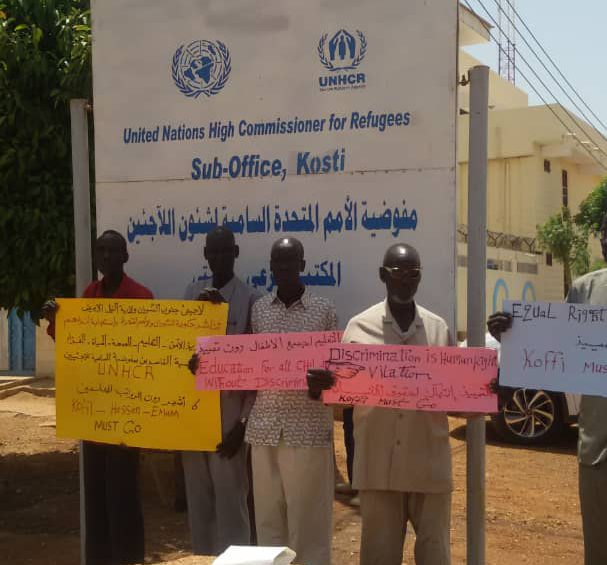 They are demanding their unpaid arrears.

The teachers from 9 refugee camps say they have not been paid for the last six months.

On World Refugee Day on Sunday, the teachers took to the streets in Kosti carrying placards and banners to demand their payment.

They petitioned the UN refugee agency and the Sudanese authorities to clear their arrears.

According to the secretary of the refugee committee on education, in January, the UNHCR and the Sudanese Labor Ministry agreed to pay each teacher at least 7,000 Sudanese Pounds per month.

But teacher Acuil Arop Utong said they have not been paid since they raised the complaint in January 2021.

He stated on world refugee day, “we went for a meeting with the Country Director and White Nile state Commissioner regarding the salaries, but they canceled the meeting.”

“So we decided to hand over a petition with our demands to them,” Arop said, adding that “we gave them a week to resolve this matter. If they fail, we will go on strike and demonstrate.”

The South Sudanese teachers in the White Nile state work in the camps that host more than 300,000 refugees.

There are 23 schools in the refugee camps. 16 are primary and 7 secondary schools.