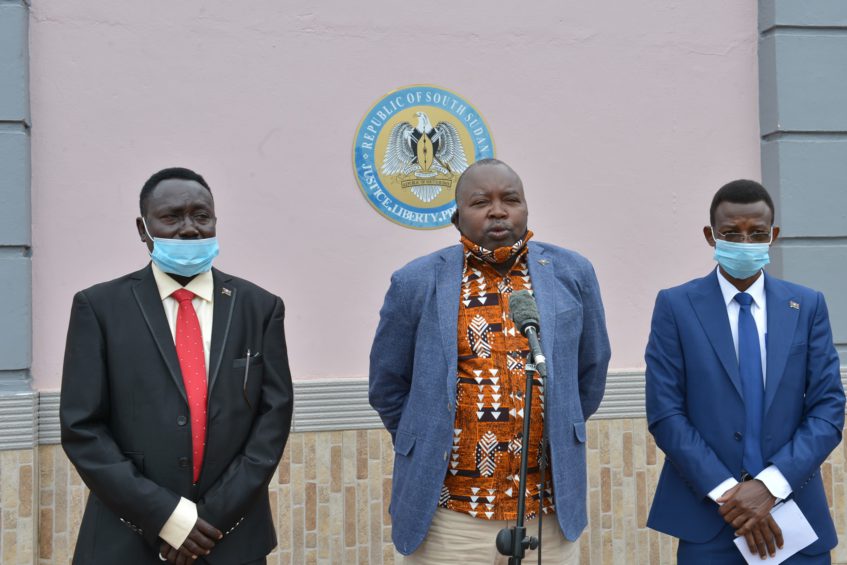 Abdul Wahid al-Nur, leader of the Sudan Liberation Movement [centre] after a meeting with President Salva Kiir in Juba on Thursday, March 18, 2021. Credit| Office of the President

The leader of the Sudan Liberation Movement has told President Salva Kiir that he is still interested in realizing the New Sudan vision in his country.

It involves the creation of a new political dispensation in which all people are equal stakeholders irrespective of their race, ethnic affiliation, religion, or gender.

“We are calling for the diversity of the State –which doesn’t allow people to use a single religion and culture. [It] is a source of strength and that is why we call for dialogue,” Abdul Wahid al-Nur said.

He arrived in Juba on Monday and met with President Kiir on Thursday.

Following the meeting, al-Nur who leads the most prominent rebel group in the Darfur region said the SLM is advocating for a people-centered dialogue that will address the root causes of conflicts in Sudan.

“The real objective was the vision for a New Sudan that will not have crises, but with one with new values, without wars. So, we believe in the new Sudan and the time is right now,” he proclaimed.

al-Nur endorsed the mediation effort by the South Sudanese government saying Kiir’s administration understands the plight of the Sudanese people.

“We came to President Salva Kiir because the people of South Sudan and Sudan are one. Those in the SPLM/SPLA rebelled and they know the problems of Sudan more than anyone.”

Last year, the SLM under al-Nur refused to join the peace process brokered by the South Sudanese government in Juba.

It said the Sudanese parties are negotiating a power-sharing deal that does not address the root causes of the conflict.