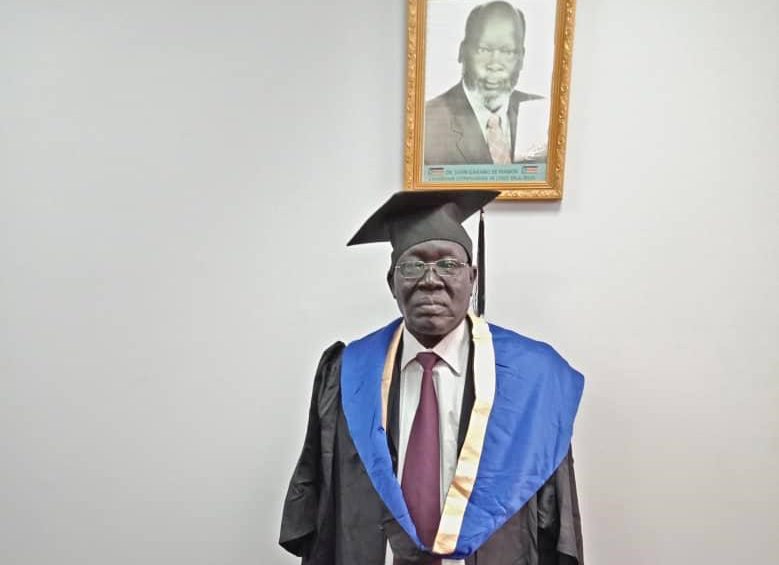 Kuol Ayuen Kuot graduated on 19 June 2021, with a second class honors in Bachelor of Education in Geography and History on June 19, 2021 | Credit | Akuei Kuol

Kuol Ayuen Kuot graduated on 19 June 2021, with a second class honors in Bachelor of Education in Geography and History. This is his first bachelor’s degree.

He is among the 1,756 students who graduated from different colleges and faculties at the University of Juba; among them are 1,452 males and 304 females.

Kuol, who hails from Jonglei State, was first admitted to the university in 1981, before the Sudan civil war broke out.

He did his first and second year before the students from the North and South fought at the university. This led to a one-year suspension of the second-year students.

Following the closure of the school, Kuol joined the SPLA movement and went to the frontline.

During the civil war, Kuol was shot in his arm and and the mouth, losing some of his teeth.

Despite all the obstacles, he didn’t lose his focus and the dream of accomplishing what he had started.

“I think it is very important for one to fulfil what one has started. It was my interest to finish what I had started,” Kuol tells Eye Radio.

In 2017, Kuol got readmitted at the University of Juba where he was able to continue with his bachelors from 3rd year.

With over 30 years of being out of school, Kuol encountered some challenges during after going back to school.

“During our time, we were referred to a particular book in the library. You get your notes there and writes them,” he recalls.

“But with this new system, whereby you get your research material on the internet gave me a hard time.

“The beginning was very difficult, but I eventually coped and I was able to finish.”

As someone who has seen behaviors of both generations – the old and younger generation – Kuol calls on young people to be ambitious and remain focused in their academic pursuits.

He would love the young people to respect the university and use it for their development and that of the nation.

“To the leadership of the country, that university [UoJ] is the mother of our higher learning institutions and it needs support from the leadership,” Kuol appeals.

He held the position of the director-general of War, Disabled, Widows and Orphans Commission from 2007-2020.

The graduate is currently the director-general of administration and finance at the Ministry of Parliamentary Affairs.

He is a father to ten children, two of whom have graduated from college (an IT and public administrator).