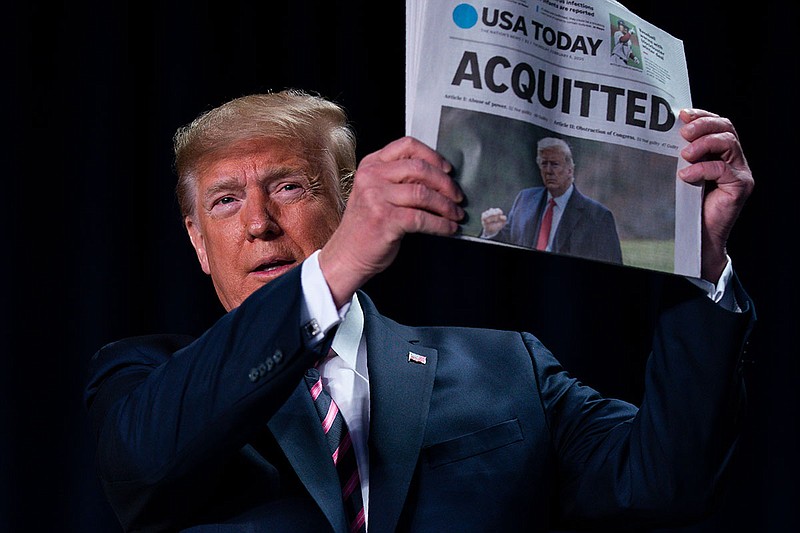 Trump: "I look forward to continuing our incredible journey together to achieve American greatness for all of our people." Courtesy

The United States Senate has acquitted former President Donald Trump in his second impeachment trial, voting that Trump was not guilty of inciting the deadly January 6 riot at the US Capitol.

The final vote was 57 guilty to 43 not guilty, short of the 67 guilty votes needed to convict. Only seven Republicans found Trump guilty.

Trump’s second impeachment was spurred by the Jan. 6 riot at the U.S. Capitol. Trump, after months of making false claims that he’d won the presidential election, called a rally in Washington, D.C., with his supporters for the same day Congress and then-Vice President Mike Pence were meeting in a joint session to certify the results of the election.

Trump, at the rally, repeated his false election claims and he and advisers used pitched rhetoric, riling up the large crowd. Trump at one point in the rally told his followers to “peacefully and patriotically” march to the Capitol, a comment his defenders point to as part of the reason why he does not bear responsibility for the ransacking of the Capitol.

But House impeachment managers argued that one comment did not cancel out the balance of Trump’s other comments in that speech or in the proceeding months. They said he bore fundamental responsibility for the mob that breached the Capitol and forced hundreds of lawmakers and the former vice president into hiding while chanting “hang Mike Pence,” among other things.

Held exactly one month after the House impeached Trump, the number of Republican senators who voted against Trump ended up higher than even what Trump’s legal team had anticipated, marking a stark departure from the first impeachment trial last year when only one Republican senator, Mitt Romney of Utah, found Trump guilty.

On Saturday, Trump thanked his lawyers and senators who voted against his impeachment conviction and foreshadowed his political future.

“I want to first thank my team of dedicated lawyers and others for their tireless work upholding justice and defending truth,” Trump said. “My deepest thanks as well to all of the United States Senators and Members of Congress who stood proudly for the Constitution we all revere and for the sacred legal principles at the heart of our country.”

He added: “This has been yet another phase of the greatest witch hunt in the history of our Country. No president has ever gone through anything like it, and it continues because our opponents cannot forget the almost 75 million people, the highest number ever for a sitting president, who voted for us just a few short months ago.”

“Our historic, patriotic and beautiful movement to Make America Great Again has only just begun,” he said. “In the months ahead I have much to share with you, and I look forward to continuing our incredible journey together to achieve American greatness for all of our people. There has never been anything like it!”