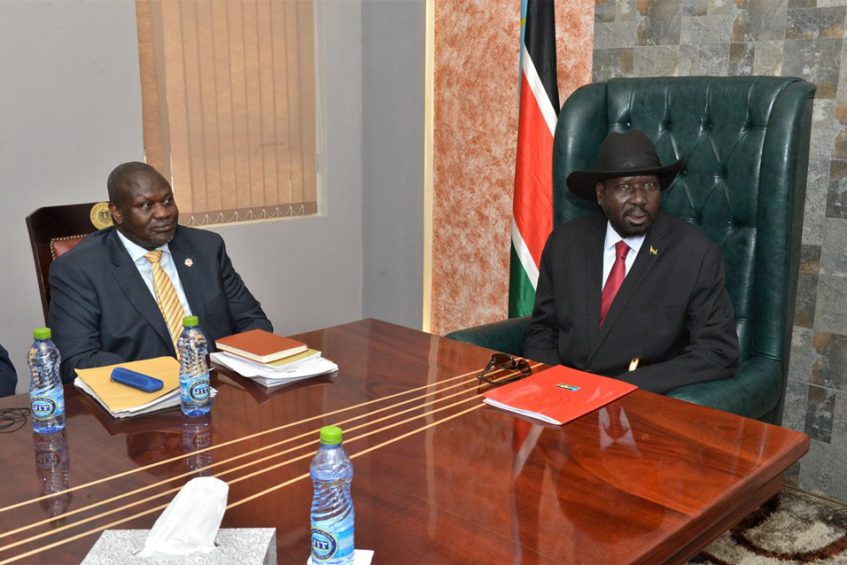 The U.S government has called into question the ability of President Salva Kiir and Dr. Riek Machar to lead South Sudan after it said the two leaders failed to form a government of national unity on November 12 as expected.

A statement by the State Department mentioned that the Trump administration will review its relationship with the government of South Sudan over the slow pace of peace implementation.

Last week, Kiir and Machar agreed to extend the pre-transitional period for 100 days to allow for the implementation of the pending tasks.

This include, screening, registration, training and reunification of the forces, and the decision on the number and boundaries of the states.

President Kiir and several other party leaders wanted to form a coalition government on 12 November, but Dr. Machar rejected the move saying the organized forces should first be trained and unified.

Advocates believe the Kiir administration largely contributed to the delays in the implementation of key provisions.

The government was to provide $100 million during the pre-interim period to facilitate the work of the various mechanisms of the peace deal.

But the National Pre-Transitional Committee recently revealed that only $40 million have been availed.

The shortage of funding and lack of political will forced several soldiers to abandoned training camps due to lack of shelter, drinking water and medical supplies.

A meeting summoned by Ugandan President Yoweri Museveni last week in Entebbe agreed to postpone the formation of a unity government until February 2020.

A mechanism will also be established for guarantors [Uganda, Sudan, Kenya] and the parties to supervise the implementation of security arrangements, governance and formation of a government.

This is the second time the pre-interim period has been extended.

In a statement issued Wednesday, the U.S said it is “gravely disappointed” with South Sudan’s leaders for not meeting the deadline to form the coalition government as agreed in May this year.

A tweet by the Secretary of State, Mike Pompeo explicitly said: “the U.S will reevaluate its relationship with the government of South Sudan and work to take action.”

Secretary Pompeo further said “the failure of President Kiir and Dr. Machar to form a unity government in South Sudan by November 12 calls into question their suitability to continue to lead the nation.”

A follow-up statement by the office of the spokesperson of the State Department stressed that the review includes working with South Sudan’s neighbors to effect a change with regards to the current uneasy situation in South Sudan.

“The United States looks to work in partnership with the region to establish a new paradigm to achieve peace and a successful political transition in South Sudan,” partial reads the statement.

It also said that America will “work with the international community to take action against all those impeding the peace process,” as it continues to “stand with the people of South Sudan during this difficult period.”

A South Sudanese political analyst, says the statement by the U.S government is an indication that the Trump administration has lost trust in the ability of Kiir and Machar to work together.

“The fact that the two cannot agree on the key issues tells the [U.S] that they [Kiir, Machar] are not ready to work together, because if the two leaders were capable of working together, we would have not reached to the stage where we are now,” Dr. James Okuk said.

The parties were to form the government in May this year but agreed to push it to November 12, over the same issues of training and unification of forces. They also resolved to train half of the 83, 000 troops required for the Necessary Unified Force.

“They would have formed the government a long time ago.”

Dr. Okuk suggests that the two leaders prove to the world, including the U.S, that they can put aside their differences for the sake of stability in South Sudan.

“If any new development takes place, the [U.S] will still welcome it -as long as it is in the interest of peace in South Sudan,” he affirmed.

This week, a renowned televangelist, T.B. Joshua also said the time has come for the leaders in South Sudan to desist from violence and work together to fix the challenges facing the country.

“As leaders, we should overcome our divisions and agree to work together for the good of this country,” he told government officials and invited guests at the State House, J1.

The self-proclaimed prophet said South Sudan is losing out on development and investment due to the prolonged political disagreements and conflicts.

Meanwhile, the UN Secretary-General has commended the two leaders for agreeing to extend the pre-interim period before rushing to form any coalition government in South Sudan.

António Guterres said the parties should use the extension to finally address all issues in contention.

“The Secretary-General urges the parties to use this extension to make further progress on critical benchmarks, including security arrangements and the number and boundaries of states, to allow for the formation of an inclusive transitional government of national unity,” his deputy spokesperson, Farhan Haq, said in a statement issued on Monday.

He underscored the importance of the leaders of the parties to the revitalized peace deal to continuously meet.

“Face-to-face meetings of the leadership of the parties will continue to be crucial in maintaining momentum,” Mr. Haq said in the statement.

On Monday, President Kiir asserted that the coming of “prophet” T.B Joshua to South Sudan and [recent extension of the pre-interim period] are indications that “this is the beginning…for the best for the people of South Sudan and [I will] tend to also believe that we have also crossed a long distance searching for peace.”

An analyst, Dr. James Okuk told Eye Radio that the words and deeds of the leaders will be scrutinized.

“They [should] prove it within these 100 days,” he concluded.