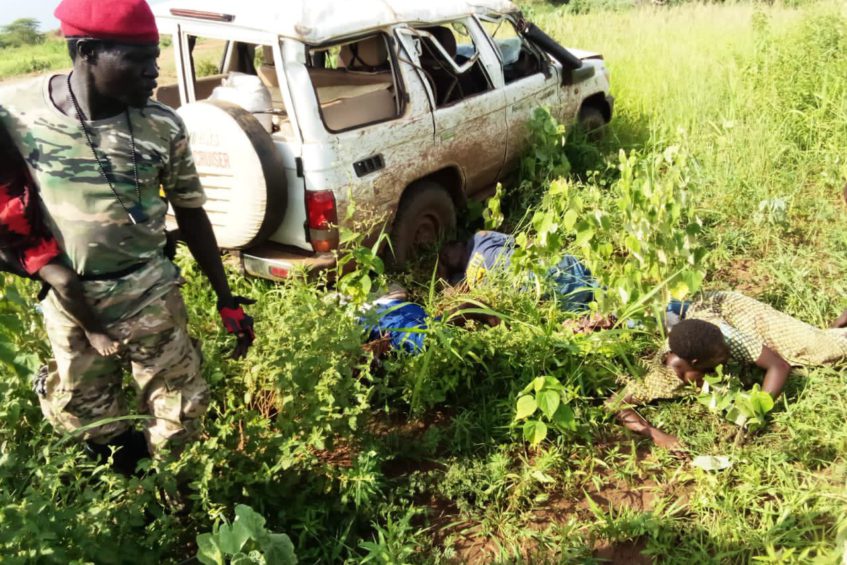 Some of the wounded passengers near the Landcrusier by the road on Thursday, June 17, 2021 | Credit | Homo Homini Lupus/Twitter

An attack on a government vehicle along the Lopa-Lafon-Torit road has left one person dead.

Two women are said to be missing after the ambush yesterday.

The vehicle was transporting a visiting U.S-based South Sudanese professor from his village in Lopit area.

Prof. James Okwaramoi and other travelers were using a Hardtop Landcruiser the deputy governor of Eastern Equatoria state offered them.

The professor and other passengers were returning to Torit at around 5 PM when they fell into the ambush at Hoss River Bridge.

The vehicle veered off the road and rolled several times. One person was shot dead, while four other passengers, including the professor, were wounded.

“We condemned this and urge our people in Eastern Equatoria to really stop carrying out such criminal activities along the road,” said Aliandro Lotok, press secretary of Governor Louis Lobong.

The convey of the Eastern Equatoria deputy governor reportedly got ambushed around hafurare along torit-kapeota road #SSOT
One confirmed dead and four others nursing gun shot wounds #RARCSS @EyeRadioJuba pic.twitter.com/BAK3hYguCw

He explained that the survivors were rescued by another convoy of the deputy governor that was plying the road.

He said the soldiers in the convoy briefly exchanged gunfire with the armed men but the criminals escaped.

The officers of the deputy governor then returned to Torit with the deceased and the wounded, Lotok added.

The motive behind the attack is unclear. However, similar incidents  in the state were reported recently.