You are here: Home  |  Featured | Humanitarian | News   |   Violence on aid workers is a ‘damaging development’

Violence on aid workers is a ‘damaging development’ 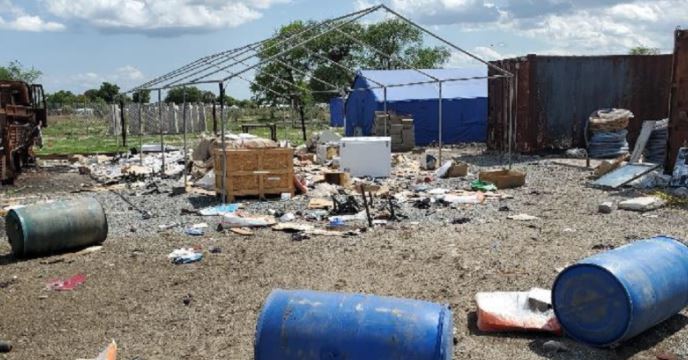 Some 550 metric tons of food, enough to feed 33,000 food insecure people for one month, were looted or destroyed in Gumuruk in Greater Jonglei in the first two weeks of May during the latest bout of violence | Credit | WFP

The head of UN Mission in South Sudan has described as “damaging development” the growing violence against aid agencies in the country.

On Wednesday, the government of Eastern Equatoria State issued directives suspending the operations of UN agencies and humanitarian organizations in Torit for a week.

This came after some local youth went on rampage, assaulting a staff of Red Cross and one for UNDP in Torit town on Monday.

“Humanitarians are now withdrawing from Torit. Who are the losers? The losers are largely the young people who are the beneficiaries of a lot of humanitarian service,” Nicholas Haysom told reporters on Thursday.

Similar attacks have been reported in Ruweng and Pibor administrative areas and Unity State.

Haysom said he has raised this concern with the country’s leadership to ensure this is put to an end.

In April 2021, angry youths stormed the compound where aid workers and their families were living in Jamjang, Ruweng Administrative Area.

It is reported that the staff were threatened, robbed, and beaten. An unknown number of humanitarian workers sustained serious injuries.

The angry locals were reportedly demanding job opportunities they said are being taken by residents of other states.

Humanitarian supplies of UNICEF were also looted in Pibor Administrative Area following the recent outbreak of communal violence in the area.

WFP said some 550 metric tons of food, enough to feed 33,000 food-insecure people for one month, were looted and others destroyed in Gumuruk recently.