VP Taban suggests buying weapons from civilians and burning them 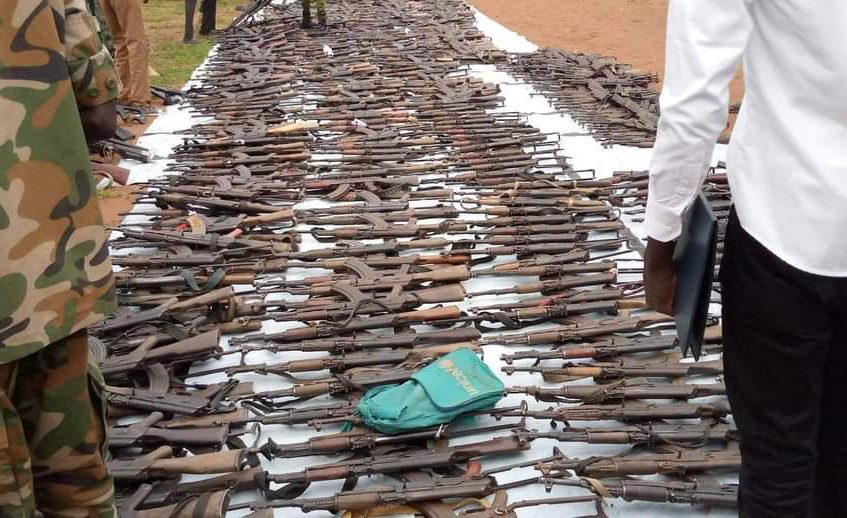 Some of the firearms collected of civilians in South Sudan - courtesy

Vice President Taban Deng Gai has suggested that the government should buy and burn illegal arms and ammunition from civilians.

Over the past few years, South Sudanese have blamed the government for failing to stop illegal possession of arms by civilians and bring to an end the vicious cycle of communal violence in the country.

Some have also criticized previous disarmaments activities, saying the exercise did not yield results in curbing the deadly communal clashes.

This is because, they say, arms collected end up in the hands of their owners – especially in greater Jonglei, Lakes, Warrap and Western Bahr el Ghazal states.

In a report, the Small Arms Survey organization notes that as of 2011, there were between roughly 3.2 million small arms in circulation, with about two-thirds of these in the hands of civilians.

According to the UN Human Rights Commission, the nature of the intercommunal conflicts have taken on an increasingly militarized stage, with military-style tactics and military-grade weapons.

It revealed that organized and heavily armed militias carry out planned and coordinated attacks on villages, with fighters dressed in a mix of military fatigues and civilian clothes.

They often attack in broad daylight, indiscriminately killing people with machetes, knives, AK-47s, and on some occasions, rocket-propelled grenades.

In his address during the 5th governors’ forum in Juba on Monday, Taban Deng Gai said the government should destroy the arms collected from civilians.

“Those who will surrender their refiles peacefully, we should give them a token even $10, $50, $100 that is enough for them but we must destroy these arms.”

Vice president Taban Deng went on to suggest that the UN should be involved in any disarmament exercise because it has the expertise.

In July 2020, President Salva Kiir launched the disarmament campaign in parts of the country in an attempt to end the cycle of violence in the restive states.

The voluntary handing over of arms campaign targeted armed civilians in Lakes, Terekeka, Warrap and Jonglei, among other areas, where violence over cattle, revenge killing, and banditry had worsened.

But some communities clashed with the disarmament forces – often arguing that the initiative by the government could leave them vulnerable to attacks.