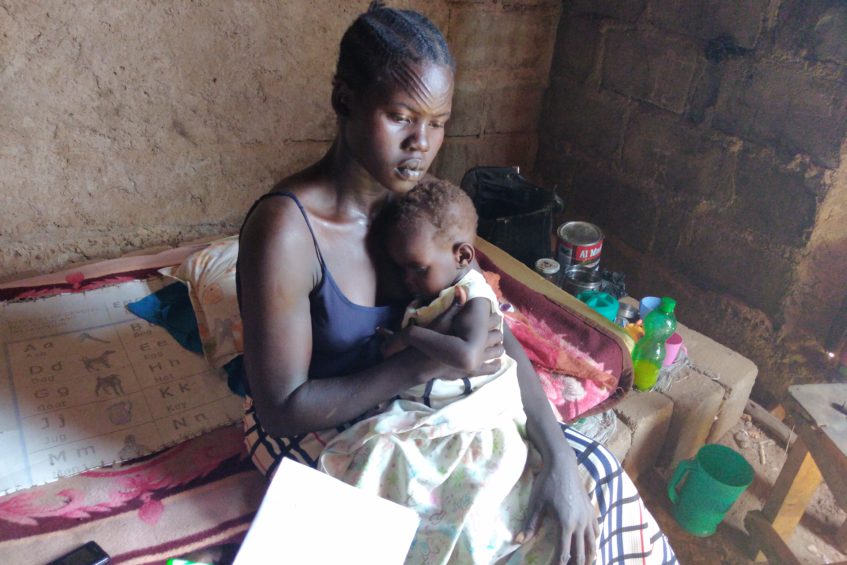 Baby Minallah Rose and her mother Madeline Jabe Thomas can be reached on: +211922854051 Credit| Viola Santo

A one and half-year-old baby girl who is unable to dispel solid waste is in urgent need of financial assistance to facilitate her surgical operations.

Baby Minallah Rose, who was born without an anus, is not in the hospital. She is at home with her mother.

She does not have a normal opening of the anus, which leaves her unable to eliminate faeces without surgery.

Madeline Jabe Thomas, the mother of the baby explains:

“I delivered my baby and after 2 days, I realized that she cannot defecate. She wanted to defecate but she cannot, so after three days her stomach got swollen. When I saw her buttock she has no anus,” she said.

It is a birth defect that makes it impossible for babies to pass stool normally from their rectum.

The abnormality may occur at the end of the intestine that connects with the anus.

James Gat-yiel is a doctor at Mauna hospital in Juba who has been attending to baby Minalla Rose.

“If the anus is not open and the child or the person is eating, the abdominal will become dispensed and it will have obstruction and that is what led to operation which was done in Mauna hospital to relieve that obstruction. But that is not final, the final needs to be done later on to try to open the anus,” he said.

Since 2019, little Minallah has been unable to go to the toilet or defecate.

According to the mother, her condition is now critical.

Madeline, who is a single mother, said she can not afford to pay for the operation.

“We went to Juba Teaching Hospital and doctors demanded 10,000 South Sudanese Pounds for X-ray, with the help of a Catholic Church in Jeng’eli, I managed to secure the money. We did the X-ray, but again they asked for another 15,000 pounds for the operations.”

Madeline was reportedly abandoned by her husband in 2019. He is said to be in a prison in Terekeka for defiling a minor.

She now lives in a one-room shelter at Goriyod in Luri, Bilpam west.

While single-handedly providing for her baby, Madeline said she has not given up on finding a medical solution to her daughter’s condition.

“They say the baby would have been referred to another country for further treatment. I keep on going to the hospital every day, but they tell me to go home and come tomorrow because the doctor is not there. This happened several times, so I’m waiting for them up now,” Madeline said.

Baby Minallah’s condition has had a serious impact on the mother.

Madeline Jame says she is in constant depression as she worries about what will happen next or the financial burden she will face for the operations.

She is appealing to well-wishers to come to the aid of her baby so that little Minalla can pass stool just like other children.

Medical doctors say it is possible to correct the abnormalities seen in the little girl.

She will require a colostomy, a surgical procedure in which an opening is formed by drawing the healthy end of the colon through an incision in the anterior abdominal wall and suturing it into place.

A colostomy typically costs between $20,000 to more than $60,000, depending on the geographic location, the hospital and the individual case.

Dr. James Gat-yiel said the procedure needs to be done soon because the baby is now experiencing some new medical conditions.

“The new condition now when the baby was brought to me 2 ago is with high fever and diarrhea, malnutrition, infection and anemia.”

Imperforate anus is a birth defect that usually appears to occur randomly for unknown reasons (sporadically). Some researchers suggest that the condition may be caused by changes (mutations) of one or more genes, possibly in association with particular environmental factors (multi-factorial inheritance).