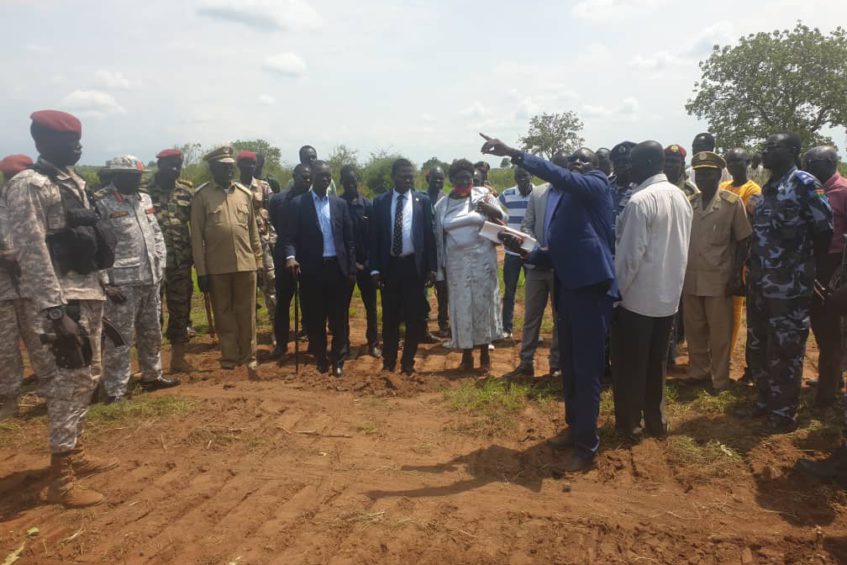 Engineers and state officials during a visit to Amadi land on Thursday/Photo/Woja Emmanuel/Eye Radio.

Land authorities in Central Equatoria State have warned local chiefs in the Amadi area against conniving with criminals in illegally giving out land tokens.

Amadi is located west of the capital Juba, near the Yei checkpoint.

According to the State Minister of Land, Housing and Public Utilities, unauthorized individuals have been allocating land to unsuspecting buyers in the area.

Flora Gabriel says these allotments are being done without the approval of the County or State authority.

People are reportedly buying land tokens for between 5,000 to 25,000 South Sudanese Pounds.

Floral Gabriel warned some chiefs in the area against selling land which she says has been demarcated since 2012.

“I am not going to allow bad things to be done here,” the state land minister said on Thursday during the official launch of the showing of plots to the rightful owners.

“I am telling the chiefs here particularly the Bari Chiefs and some Mundari Chiefs living here. This place is demarcated but they went ahead and created a map and this is done by people who call themselves chiefs. And if you a Bari Chief, you should be able to know who has been living here and if some people come here, you know who they are so that you won’t put people into problems,” Flora added.

Last month, the Juba County authorities revealed that they had apprehended 22 people accused of selling land in the Amadi area.

Local chiefs from Rejaf Payam also petitioned the state governor to stop the illegal allotment of land in their areas.