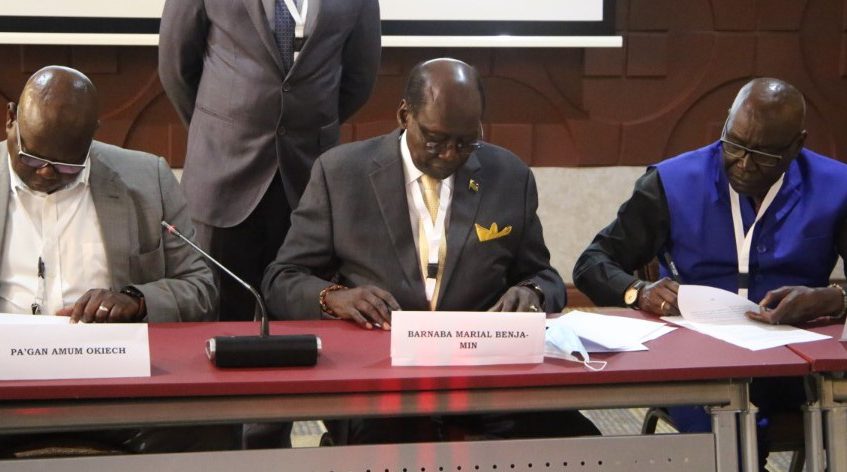 Talks between the government and the holdout groups have resumed in Rome, Italy.

The peace negotiation was supposed to recommence last week.

But the government requested the Saint’Egidio mediators to reschedule the talks until after the Independence Day celebrations.

A government delegation led by the Presidential Affairs Minister, Dr. Barnaba Marial, arrived in Rome yesterday for the talks.

Speaking to the press earlier on Friday morning, Dr. Marial said they went for the talks with all options on the table.

“Today, we will continue with discussions with SSOM led by Pagan Amum and Paul Malong based on the declaration of principles that we had signed in Naivasha in March this year,” said Dr. Marial.

“We expect the talks to go amicably, and the government delegation under the direction of President Salva Kiir is coming with an open mind, with all the options on the table.”

The leader of the National Salvation Front, Thomas Cirillo is not part of this, having declined to sign the Declaration of Principles with the government in Naivasha, early this year.

The Sant’Egidio Catholic community-based in Rome initiated the mediation between the government and the South Sudan Opposition Alliance or SSOMA in November 2019.

The mediation is aimed at supporting an inclusive peace agreement in South Sudan by persuading the holdout groups to join the revitalized peace deal signed in September 2018.

The Presidential Affairs, Minister, Dr. Marial says any grievances of the hold-out groups would be addressed and included in the revitalized peace agreement as an addendum.

“We are confident that the present agreement we are implementing is bringing peace to the people of South Sudan. And we would like our brothers and sisters—the non-signatories to join us in the implementation process,” Marial said.

“If they have any reasons or any views that they believe are not covered in the revitalized peace agreement, then we are in a position to review what those views are, and they can, later on, become an addendum to R-ARCISS.”

Ten months earlier, the parties including Thomas Cirillo’s NAS, signed a declaration in Rome to observe the Cessation of Hostilities Agreement and further negotiations on root causes of political violence in South Sudan.