You are here: Home  |  Featured | News | Peace | Politics   |   US asked to exercise patience after it recalled ambassador

US asked to exercise patience after it recalled ambassador 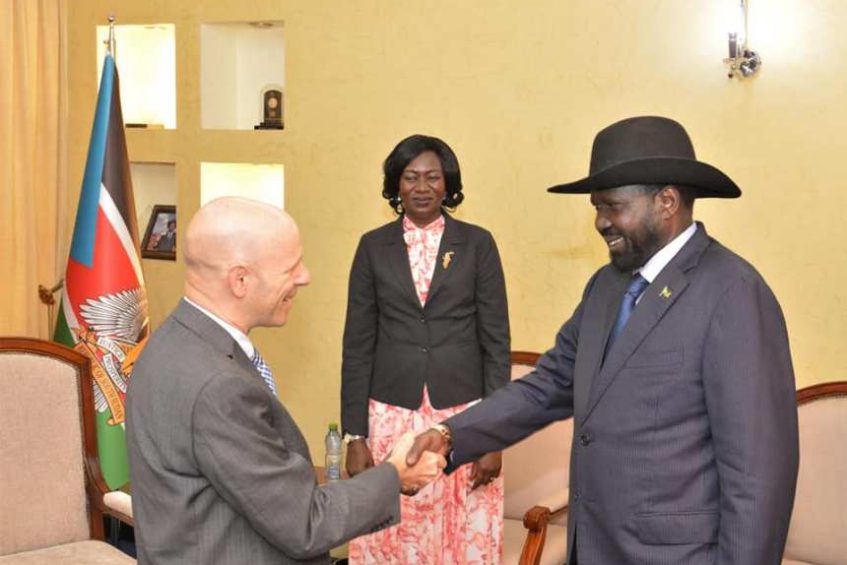 The Ministry of Foreign Affairs and International Cooperation has urged the US to exercise patience after the Trump administration recalled its ambassador.

On Monday, the White House called back Ambassador Thomas Hushek for consultations related to the recent failure by the parties to form a coalition government on 12 November.

Initially, the peace parties were to set up the unity government in May 2019.

However, they pushed it to November to allow for the implementation of key security arrangements.

Recently, the main principals – President Salva Kiir and main Opposition Leader Dr. Riek Machar disagreed over the issue, prompting the regional leaders to convene a meeting that saw them agree to extend the pre-transitional period by 100 days.

Kiir wanted to form the government with or without Machar, who insisted on the full implementation of the security issues as stipulated in the peace deal.

The international community had also strongly advised against the exclusion of the SPLM-IO leader or any other signatory to the September 2018 peace accord.

The White House reacted to the new extension, saying it was “gravely disappointed” with South Sudan’s leaders for not meeting the deadline.

It also questioned the ability of President Salva Kiir and Dr. Riek Machar to lead South Sudan, adding that it would “re-evaluate” its relations with Juba.

“It’s unfortunate that Mr. Mike Pompeo, the United States secretary of state, questioned the suitability of our head of state, an act that is regrettable and in total disregards of the norms of diplomatic practices,” partly reads a statement issued on Tuesday by the Ministry of Foreign Affairs and International Cooperation.

But the government of South Sudan says it is still hopeful that a unity government will be formed at the end of the 100 days.

Amb. Mawien Makol, who is the spokesperson of the Ministry of Foreign Affairs, urged US to exercise restraint and patience with the South Sudan peace process.

“We are urging the United States to reconsider the withdrawal,” Amb. Makol told Eye Radio on Tuesday.

“It is their concern; it is true they have reached that decision but we are still urging them to reconsider and try to support the country.”

Although the U.S has recalled Ambassador Thomas Hushek, it recently said the United States stands with the people of South Sudan in their pursuit of peace and will work in partnership with the region to support efforts to achieve peace and a successful political transition in South Sudan.

Last month, the Senate in the United States introduced a bipartisan resolution in support of the peace process in South Sudan.

The Democrats and Republican senators called on the leaders to keep the momentum going to strengthen the fragile peace that exists in South Sudan.