Why malnutrition is alarming in South Sudan 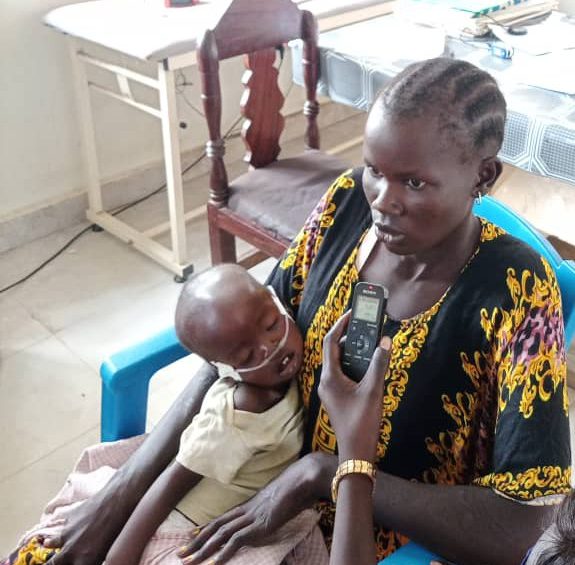 An estimated 7.3 million people, about 60% of South Sudan’s population, are projected to be facing severe acute food insecurity in 2021, according to UNICEF.

In addition, an estimated 1.4 million children in the country are expected to experience acute malnutrition in 2021, which is regarded as the highest since 2013.

According to UNICEF, these alarming figures are due to ongoing insecurity, the socioeconomic consequences of the Covid-19 pandemic, and limited access to essential services for vulnerable children and families.

Margaret Atto, a mother of four children who lives in Gumbo Sherikat, is nursing her child who is suffering from malnutrition at Al-Sabbah children hospital.

This is the first time for Margaret to see her child suffering from malnutrition.

Margaret normally breastfeed her first three children, starting from the date of birth until six months, without giving them extra food.

She found it hard to continue doing the same with the fourth child due to inadequate food. Her two-year old is suffering from malnutrition for over a few months due to lack of proper feeding of the children.

Margaret and the husband are not working; both are surviving from the support offered by her husband’s family.

In an interview with Journalist Jennifer, she said, about three months ago, her child started suffering from diarrhea, vomiting, fever and the child lost her appetite of breast milk.

After her child condition deteriorated, Margaret said she had to stop the child from breastfeeding and took her child to different clinics at Gumbo but without any improvement.

”I was seeking advice from neighbors on what to do since I have no knowledge of malnutrition, because I never experienced it before,” she said.

“I was told to rush my baby to Al-Sabbah children hospital for medical attention.”

“The baby’s condition has now improved compared to the past weeks. I believe she will be alright because I follow the instruction of doctors.”

Vicky Achan is a doctor in charge of a stabilization center at Al-Sabbah. She said malnutrition occurs due to inadequate food.

‘Lack of food to feed the children and spacing of children can cause malnutrition not only for children even among elderly people,” she said.

The doctor urged the parents to have spacing of children by giving birth at least after two to three years.

“Malnutrition is a dangerous disease which can kill a child in a short period of time, but treatable,” Vicky lamented.

”Fighting malnutrition is so challenging due to absence of peace, and need a collective efforts of parents, government and doctors in the country.”

Iwa Charles Martin, a malnutrition specialist at Al-Sabbah hospital said malnutrition occurs due to lack of proper breastfeeding of children.

”Mothers should breastfeed their children at least from the day of birth until six month without giving extra food, after six month she can add extra food to the child and continue with breastfeeding,” Charles stated.

He said the hospital is providing the malnourished children with milk and vitamin A, which help the children to recover faster.

Charles further stated that this year from January to April, over thirty children are suffering from malnutrition in Al-Sabbah hospital, twenty of whom recovered and discharged from the hospital.

”Lack of appetite and general body weakness is the first sign and phase one of malnutrition and the child can still recover within the short period of time,” Charles added.

Margret child is likely to survive because the child is in phase one and she normally follows doctor’s instruction by giving the food and medicine on time to her child.

Combining a business with taking care of a suckling baby is such a daunting task for breastfeeding mothers in South Sudan.

Celina Bako, a mother of six children wakes up at 5 o’clock each morning, prepares breakfast for four of her older children and breastfeeds the younger one, a 6 months old named Joshua and then hits the road to the market, leaving Joshua in the care of his older siblings.

Bako owns a little stall in a custom market, one of the sprawling markets in South Sudan’s capital Juba, where she sells green vegetables, such as okra, and cabbages.

In the middle of the day, Celina returns home to breastfeed her son, leaving the business with her colleagues which she says impacts her business negatively.

“Every day, I return home at 1 O’clock to breastfeed the baby. Sometimes, I close my business early, so that I can rush home to take care of my baby, especially if he is not well, this reduces the number of vegetables I sell,” she told the interviewer.

Celina, who is a single mother, says the business is the sole source of sustenance for her and her 6 children.

“This business is where I eat. The money from here is what I use to buy food for the children and take them to the hospital when they are sick,” Celina said.

Shuttling back and forth between the market and home where she goes each afternoon to breastfeed the baby and then making the two journeys back to the market on foot is a physically exhausting activity for Celina, who lives at Kafuria, a village that’s 10km west of Juba city.

“I walk most of the time because there are no mua-sulaat (taxis) that go to our area,” said Celina.

Ruth Muka, a trained nutritionist, told Eye Radio reporter that the erratic breastfeeding plan that Celina and most of her colleagues (mothers working in the market), have put their babies at risk.

She suggests that they breastfeed the babies more often than they do now.

“At six months, the child should be introduced to other solid foods or thick liquids as additional feeds to the breast milk. However, not all children adapt easily to such a new system of nutrition,” said Muka.

Literally, breast milk is alive and it ingests a lot of living cells that boost the babies’ health.

According to nutrition experts, breast feeding the baby once in the morning and at 1pm might actually weaken the immune system of the baby exposing it to illnesses such as diarrhea and flu amongst others,” Ruth said.

The two-hour journey the mother of six makes in the middle of the day to breastfeed her baby is not the only problem she faces.

Celina also endures the pain caused by the accumulation of breast milk over the period she is in the market and the baby being at home.

“When I reach home, the first thing I do is to wash the breast and then breastfeed my child but the breast feels painful because when the baby takes long without breastfeeding, the breast milks accumulate and it causes a lot of pain in my chest,” she said.

“I have to take Paracetamol or Aspirin to relieve the pain every time,” Celina revealed.

Pricilla Bayo, a nutrition specialist with UNICEF, advises lactating mothers who can’t be around to breastfeed their babies to milk their breast milk in a cup or a clean container and keep it to feed to the child at the appropriate time, adding that this will relieve the mother from the pain caused by milk accumulation in the breast.

“For a mother feeling pain in the breast is because of milk accumulation and she needs to express her milk in a clean cup after washing hands with soap and clean water. The milk can be covered well and fed to the baby,” Bayo said.

“If the pain is too much and there is lump or swelling in the breast, she should seek the advice of a doctor. If this is so severe, this will interfere with breastfeeding and will affect the growth and development of a child,” she said.

Most of the nursing women who spoke to Eye Radio reporters said that it is difficult to carry the child to the market because the nature of the business requires a constant lookout for customers. So having the baby in the market would be a distraction.

She too leaves her 7 months old baby at home when she goes to work.

“There are a lot of things you can’t do while carrying a little baby with you. I cannot tie the baby on my back and move around here in the market,” Joan said.

“This business requires you to move up and down and I can’t manage with the baby so I leave her at home with my older children. I need to maximize my time in the market to earn enough money to support the family.”

For his part, Gordon Data, a women empowerment activist says that the marketplaces like most public institutions are not designed to help breastfeeding women.

He argued that future planning of public institutions like markets should consider providing spaces for breastfeeding women like day care centers embedded in the market.

“Just like the government encourages employers to have a space for women to have their children at their work environment, the government should start thinking the same for other public institutions,” said Gordon.

Women are increasingly playing a vital role in the family economy.

Many war widows and single mothers whose numbers are rising in urban centers are increasingly engaged in small scale businesses yet the conditions hugely doesn’t favor them especially when nursing little children.

According to reports published on 31 July 2020 by UNICEF 90% of babies in South Sudan benefit from breastfeeding, nearly one third of them less than six months old are   not exclusively breastfed.

Breastfeeding has proven to be the first nutrition for babies. Breastfed children have at least six times greater chances of survival in their months.

Breast milk provides all the nutrients, vitamins and minerals that an infant needs for growth for the first six months. No other liquids, even, or food are required.

Betty Achan Ocheng, is a nutritionist and head of Stabilization Center at Al-Sabbah Children’s hospital.

She urged lactating mothers to exclusively breastfeed their infants to reduce the rate of malnourishment.

However, the current situation doesn’t allow a mother to breastfeed their children because most women are the breadwinners in their families.

Achan says a child from its day of birth up to six months is to breastfeed.

“Keep hygiene and exclusive breastfeeding, if you don’t buy drugs then the child will be sick and that is why we are losing our children but it the conditions pressing mothers,’’ said Achan.

“Go with the child to the market or wherever you are going take care of that child. When the child is sick for one to three days, take the child to hospital,’’ the nutritionist said.

Angelina Nyanror is a mother of a two-year child who lives alone as her husband is on official duties.

She gets it hard to stay home to breastfeed her child as required because she needs to put food on the table.

‘’Today, I am here at Al-Shabbah hospital because my child is getting weaker and he is having a serious diarrhea. I was at a tea stall selling tea when I received a call that my son is sick,’’ she said.

‘’I started feeding him with porridge and some soft food when he was 5 months just to give me time to go and work. I could leave him home with my younger sister, and return later to breastfeed him,’’ Nyanror added.

Editor Note: This article was written by Jennifer James, Lupai Moses, and Kourwel Kur, some of the journalists trained by Eye Radio under UNICEF’s Communication for Development project. Eye Media thanks UNICEF for the support offered in order to have this successful basic journalism training on content production to promote integrated life-saving messages and prevention of undernutrition.