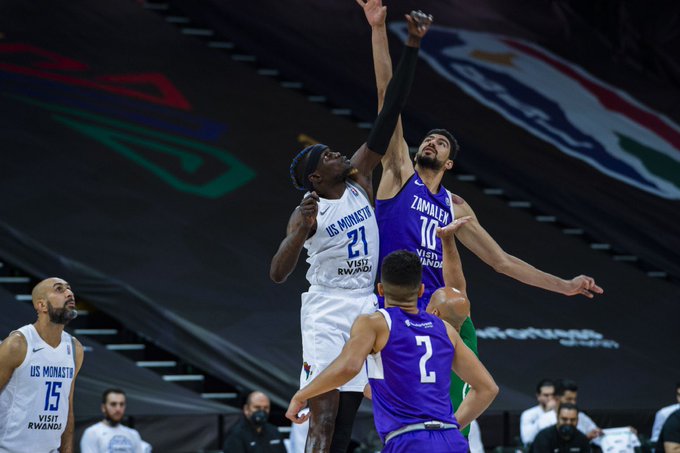 Egyptian side Zamalek is the champions of BAL’s inaugural season after beating US Monastir of Tunisia 76-63 in the final. /BAL.

Zamalek of Egypt defeated US Monastir of Tunisia 76-63 to win the inaugural Basketball Africa League (BAL) Championship, which took place at the Kigali Arena in Rwanda.

The championship was broadcast to fans in 215 countries and territories in 15 languages, according to the NBA.

BAL President Amadou Gallo Fall presented Zamalek with the BAL Championship Trophy designed to represent the baobab tree, which is native to Africa and known as the “tree of life” for providing food, water, shelter and protection to people and animals alike.

Award winners were selected by a panel of sportswriters, broadcasters and NBA team scouts in attendance, with nominees receiving three points for a first-place vote, two points for a second-place vote and one point for a third-place vote.

The 12 BAL Head Coaches voted for the Manute Bol BAL Sportsmanship Award. Coaches could not vote for players on their own team. Both the BAL group phase and Playoffs were considered as part of the voting process.

Walter Hodge (Zamalek) was named the Hakeem Olajuwon BAL Most Valuable Player after leading his team to an undefeated 6-0 record with per-game averages of 15.5 points, 5.7 assists and 5.0 rebounds.

Anas Osama Mahmoud (Zamalek) was named the Dikembe Mutombo BAL Defensive Player of the Year after recording per game averages of 6.7 rebounds and 2.8 blocks.

Makrem Ben Romdhane (US Monastir) received the Manute Bol BAL Sportsmanship Award for exemplifying the ideals of sportsmanship and camaraderie.

Additional awards will be announced tomorrow on the BAL’s social media channels, including the BAL All-First Team, 2021 BAL Scoring Champion and Ubuntu Award, which is awarded to an individual or organization that has made an impact on the local community during the first BAL season.

Olajuwon became the first player from Africa to be drafted into the NBA when he was selected first overall in the 1984 Draft by the Houston Rockets. The two-time NBA champion and Hall of Fame inductee was also named league MVP in 1993-94 when he led the Rockets to the franchise’s first NBA title.

Mutombo won a record-tying four NBA Defensive Player of the Year awards and was selected to the NBA All-Defensive Team six times during his Hall of Fame career. Bol, who passed away in 2010, enjoyed a 10-year NBA career as a 7-7 center and is recognized as one of the most imposing shot-blockers of his generation.

Champions from the national leagues in Angola, Egypt, Morocco, Nigeria, Senegal and Tunisia earned their participation in the inaugural BAL season.

The remaining six teams, which came from Algeria, Cameroon, Madagascar, Mali, Mozambique and Rwanda, secured their participation through BAL qualifying tournaments conducted by FIBA Regional Office Africa across the continent in late 2019.

The Basketball Africa League is a partnership between the International Basketball Federation, FIBA, and the American National Basketball Association, the NBA. The B-A-L is a new professional league featuring 12 club teams from across Africa that is being played for the first time in Kigali, Rwanda this year.

This is after it was postponed from last year due to the pandemic. The B-A-L builds on the foundation of club competitions FIBA has organized in Africa and marks the NBA’s first collaboration to operate a league outside North America.