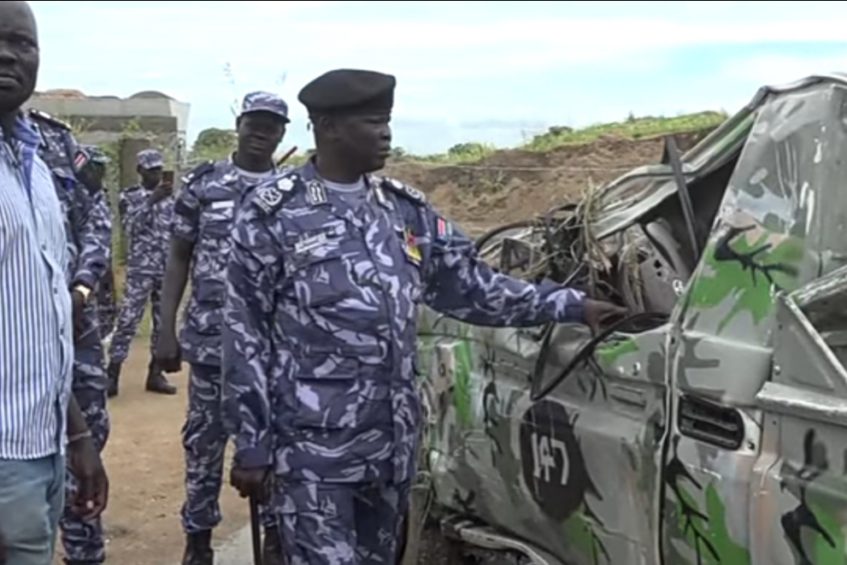 General Majak Akech, the Inspector General of Police inspecting one of the NSS Vehicles that overturned while crossing Luri river on Saturday Sept. 25, 2021 - courtesy

At least four soldiers have died and 16 others injured after two vehicles overturned while crossing Luri river, near Juba over the weekend.

According to the Inspector General of Police, the Toyota pickup carrying soldiers assigned to facilitate the return of cattle from Juba to Terekeka overturned on Saturday while trying to cross the overflowing Luri River.

General Majak Akech says 16 of the soldiers have survived the accident, but four have drowned.

Speaking during a visit at the scene of the accident at Luri Bridge on Sunday, Gen. Majak Akech one of the Toyota pickups belonging to national security have been recovered and the other taken by the water current.

“I came for a visit here at the accident scene, two of our vehicles were coming for a mission of facilitating the return of cattle from Juba to Terekeka when they reached Luri bridge they found the river was overflowing and it swept two vehicles,” Gen Akech.

The Toyota pickup was headed towards Luri from Juba with 20 soldiers on board.

Luri River has claimed several lives as people try to cross it.

The bridge collapsed in 2012 and ever since, it floods when there are heavy rains.

The construction of the deadly Luri Bridge is ongoing and to be completed in 2022, according to the Ministry of Roads and Bridges.