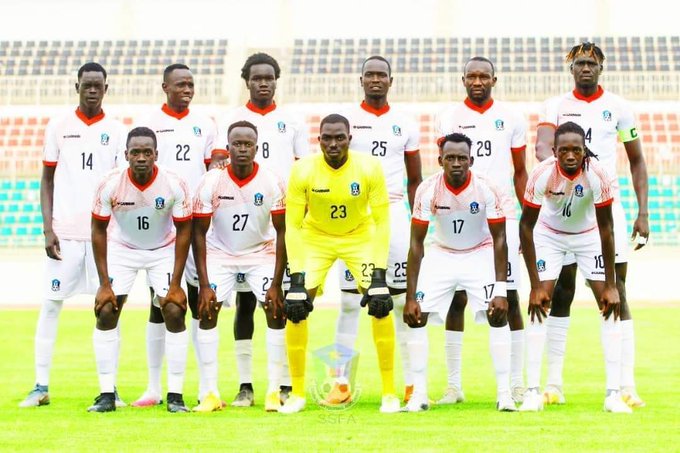 Tbe Bright Stars are due to play Jordan tomorrow: Photo/SSFA

The South Sudan Football Association has confirmed that eight players plus one official have tested positive for Covid-19 in Qatar.

The delegation which consists 401 members —23 players and 18 officials arrived in Doha on Friday morning ahead of their game against Jordan tomorrow to qualify for a place in this year’s FIFA Arab Cup tournament.

According to the president of SSFA, the eight players—all from the starting lineup of the Bright Stars’ team tested positive yesterday.

“First of all, I am very sorry for this bad news and I am wishing for those players a quick recovery,” said Francis Amin, SSFA President.

“But they are in a good health condition, although the result shows eight players are positive and those are the main players.”

“It is very bad news, but we don’t have option,” the SSFA president added.

The team’s head of delegation, Mr. Mujahid Ali told Eye Radio that a team from the health ministry in Qatar together with FIFA has relocated the positive players to another hotel for isolation.

“At three o’clock this morning the delegation from Qatar ministry of health and FIFA took the eight players to another hotel for isolation and medical attention, but in fact all the players are in good condition,” Mr. Mujahid Ali said.

The National Team (Bright Star) and the Delegation to Qatar had their second COVID-19 test this morning.
SSFA wishes them all the best, as they await for their final test results.#ssfaonline pic.twitter.com/1XErOQmrRj

Before traveling to Qatar, the team reportedly had tested negative in Juba except for one player who was then dropped.

The manager of Biolab, a Covid-19 laboratory in Juba said they tested all members of the delegation and only one of them had tested positive.

“What happens is we as a private sector don’t do counseling and the counseling is supposed to be done by the public health after we report the positive person. So for me if one from the team is positive and he was still with the same team after the 72 hours, the rest of the team can be positive because they are still with them together,” Peter Ngor explained.

The players are waiting for the result of their second test taken this morning.