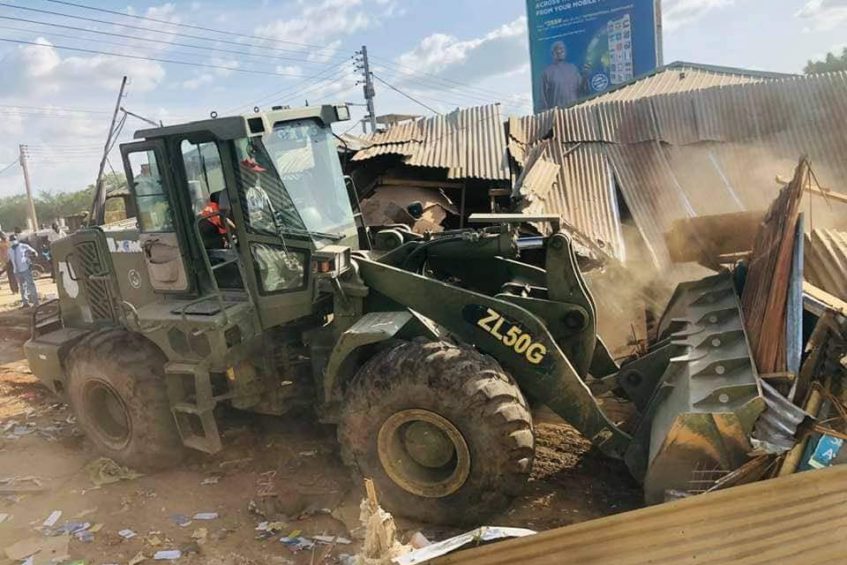 Bulldozer pulls down a structure at Customs market in Juba on Tuesday, September 21, 2021 | Credit | Courtesy

Last week, the mayor had the stalls demolished at the Customs market, saying they were illegally erected.

But the traders argue that the mayor did not notify them of the demolition.

“They should have given traders a notice – at least between three or six months,” a trader, who refused to be identified, told Eye Radio on Friday.

“We pay a lot of taxes here; we generate revenues for the council; we pay for licenses. So you don’t just come, knocking down people’s businesses. It’s not good.”

The traders whose structures were bulldozed by the city council recently also appealed to the government to provide them with a piece of land to continue doing business.

Ajang Ajang, a trader of second-hand clothes at a custom market, stated that: “We want to tell them to get new places for us to work. I will not leave work because I have nowhere to go. If they get a place, we don’t have any problem.”

“Some of us have children in the university; some of us have families and they get their incomes from this businesses we run by the road. If we don’t work here, where will we go?”

Another trader who also declined to be identified says they are now jobless after their business at custom marker was destroyed by Juba city council.

“There is no work and our place was demolished. This was a surprise because we were not told where to go,” he said.

“Let the city council remember that we are the people pay for licenses, garbage collection, and service fees every year. Why did they have to come without any warning?”