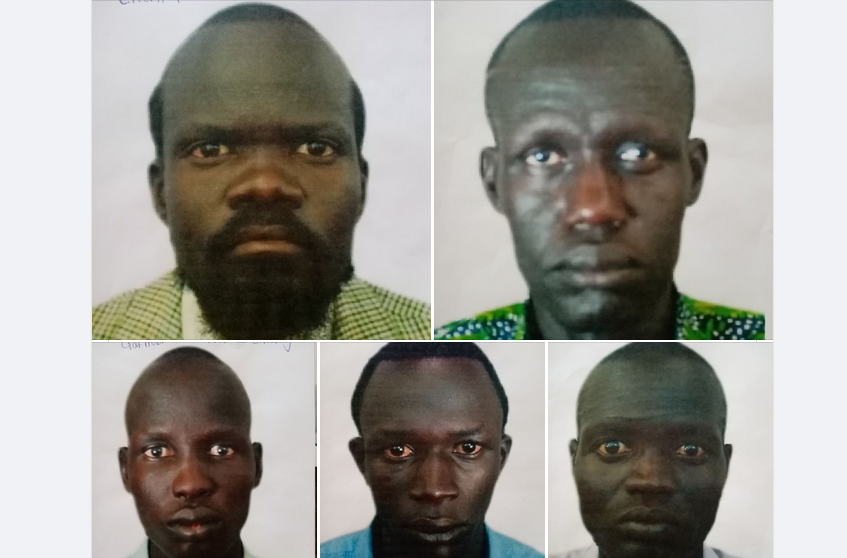 A reward of 2 million South Sudanese Pounds will be given to a person who will give information leading to the arrests of each of them/SSNPS photo.

Police have offered a reward of two million South Sudanese pounds for information leading to the arrest of five men wanted for kidnapping crimes.

The national police service published pictures of the five notorious men in a public notice on Sunday, saying they are on the run.

A reward of two million South Sudanese Pounds will be given to a person who will give information leading to their arrests, police said.

According to the police, this group has been “involved in kidnapping people, torturing, maiming, and even killing if the relatives of victims failed to pay a ransom.”

On Tuesday this week, nine people were kidnapped along the Juba-Terekeka road.

The armed abductors reportedly asked for a ransom of millions of South Sudanese Pounds.

They were later released on Thursday, after families of those abducted reportedly paid the ransom.

Kidnapping crimes are punishable by law.

According to the South Sudan Penal Code Act 2008, whoever kidnaps or abducts any person so that such person may be murdered or put in danger of being murdered, commits an offense, and upon conviction, shall be sentenced to imprisonment for a term not exceeding fourteen years, or a fine, or both.