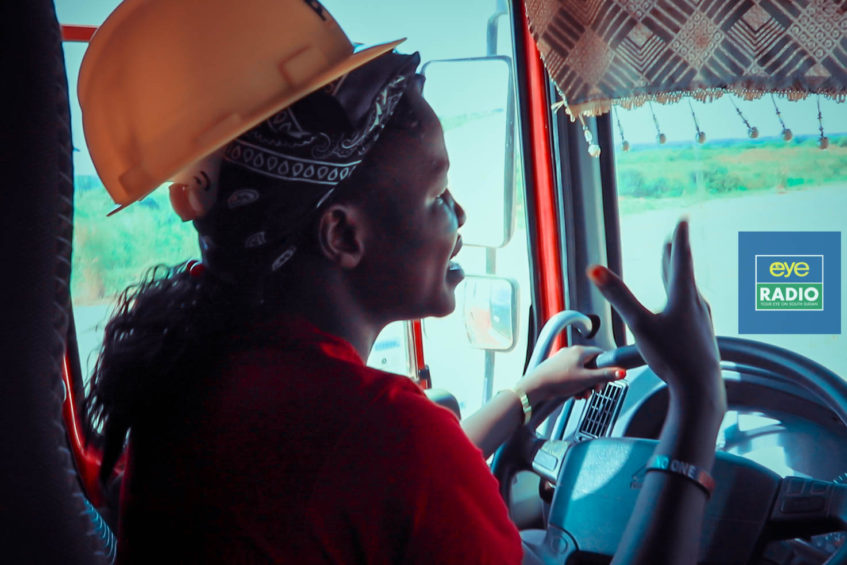 An inspiring young South Sudanese woman driving a heavy-duty truck in the ongoing construction of Juba – Bor road has encouraged fellow women to have determination.

“Everything is the same, if you fear, you will just waste your time thinking that the thing is hard to learn.”

“Whenever you take a move, or you decide to do something and you take an action, you will learn and know how to do it. It is just a matter of deciding and taking an action and you will know it automatically,” Priscilla told Eye Radio on Wednesday in an interview.

Priscilla told Eye Radio that she spent about two weeks learning how to drive a Sinotruk after being enrolled for on work driving training at POINT investment.

She is currently driving a Sinotruk where she is collecting marram at a borrowing pit and dumped at different sections along Juba – Bor road.

“I came and saw a lot of ladies cooking, other ladies were engineers and there was no lady driving. So I said I will learn how to drive.”

According to the Women in Trucking Association, women make up 47% of the workforce. That includes 7% of drivers and 23% of all management roles.

Reports suggest that there are few female heavy-duty truck drivers around the African continent that are transforming the industry by making it more inclusive.

Statistically, women are responsible drivers. They are involved in fewer traffic accidents, use less fuel and breaks, and, therefore, reduce maintenance costs.

In developing countries like South Africa, women heavy-duty truck drivers do not only improve the industry but also save lives on the road.

Roads in South Sudan are often impassable during the rainy season, from April to October or November.

Experts believe that construction of roads involves the paving, rehabilitation, and or reclamation of degraded pavements in order to achieve a state of good repair and increase road traffic safety.

This is characterized by preparation of the existing base course layer, application of tuck coat, preparation and placing of premix, rolling, quality control of bituminous concrete construction and finished surface.

Months after mastering driving a Sinotruck, Priscilla says she goes about 85 meters in speed in order to deliver a variety of materials that are used in the construction of Juba-Bor roads.

Being the third born in a family of seven, Aluel Priscilla lives with her parents in Bor county of Jonglei state years after completing her secondary school in Uganda.

Priscilla is among the few South Sudanese girls that benefited from the Windle Trust secondary education scholarship programme at Kiryandongo Refugee Settlement in Uganda.

Priscilla’s dream is to become a Biologist, scientific studies of humans, plants, animals and the environments in which they live.

Being among the seven children raised by her parents, Priscilla could not proceed to achieve her dream after the parents failed to meet her further studies requirement.

“When I was in secondary school, I was under a four year scholarship. After the scholarship, my father was not able to continue paying my school fees so I decided to come and see the ground and how I can help myself to continue with studies but there was no quick help.”

In East Africa for instance, there are fee disparities for students interested in studying the combined medicine degree in the three top universities in the region.

In 2014 for example, Nairobi used to charge  $5,230 a year compared to $1,065 at Muhimbili University of Health and Allied Sciences upgraded to University of Dar es Salaam’s faculty of medicine and  $1,000 at Makerere.

The course takes a minimum of five years.

In Nairobi, health-related undergraduate degrees such as nursing, dental surgery, radiography and pharmacy had a price tag of $2,000 per year – double the $1,000 fee charged at Muhimbili.

Priscilla told Eye Radio that she is determined to ensure that she achieves her dream in the next years to come.

Aluel Priscilla began the casual work at POINT Investment with little or no related working experience where she was earning about 60,000 South Sudanese pounds in a month.

Today Priscilla earns more than 60,000 pounds which she said helps her put food on the table and address other needs in the family.