At least 7 aid workers killed this year in S.Sudan -Report 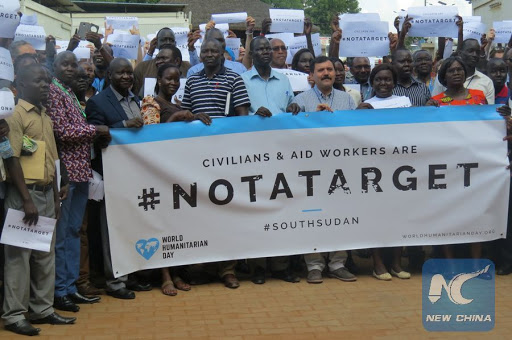 At least 7 humanitarians have been killed in South Sudan this year amidst an escalation of violence against humanitarians in recent months.

The first quarter of 2021 has been characterized by harassments, assaults, and killings of aid workers while on the line of duty, according to a series of reports by Eye Radio.

These incidents have been reported in Eastern Equatoria, Jonglei, Unity, and Lakes States, including Pibor and Ruweng Administrative Areas.

On January 30, 2021, a humanitarian worker was shot dead while returning from his work supporting vulnerable families near Bentiu. The unnamed staff worked for Joint Aid Management, an African-founded NGO operating in the country.

On February 14, gunmen attacked a vehicle carrying a polio vaccination team and supplies from Rumbek Centre to Rumbek North. At least 10 people including one health worker were killed in two separate incidents.

One staff member was seriously injured and airlifted to a hospital.

Then on April 28, humanitarian workers were also physically assaulted by youth in separate incidents in Torit town, Eastern Equatoria state.

On May 7, a South Sudanese security guard working for ZOA protecting humanitarian supplies was killed during communal fighting in Gumuruk, Pibor Administrative Area.

On the same day, more than 2,000 cartons of Ready-to-Use-Therapeutic-Food were looted.

The food included cereals, pulses, cooking oil and nutrition supplements for the treatment and prevention of severe malnutrition among 2,000 children.

Meanwhile, two schools with education material were also burnt down in Gumuruk forcing schools in all the four payams in Pibor county to temporarily close.

On May 10, staff of two international non-governmental organizations were physically assaulted in their compounds by angry youth in Renk, Upper Nile state.

On May 12, an aid worker was killed when criminals fired at a marked humanitarian vehicle between Camp 15-Chukudum road in Eastern Equatoria state.

A female aid worker for the Cordaid organization who was a Reproductive Health Specialist was killed in the attack. Clara Amono died from gunshot wounds.

A week later, another humanitarian worker was brutally murdered in Unity state on May 21.

Dr. Louis Edward who was working for the International Rescue Committee, IRC, was killed inside a health facility in Ganyliel Payam, Panyijiar County.

He was found in a pool of blood with a slid throat in a makeshift bathroom.

On the same day, an IRC’s convoy, including an ambulance, carrying 10 aid workers, was shot at by unknown gunmen at the outskirts of Guol village, south-east of Koch town in the same Unity State.

However, the humanitarians escaped unharmed.

Then on June 7, two employees of the Doctors with Africa -CUAMM organization were killed while traveling along the Aluak-luak – Mapuordit road.

Moses Maker, a nutrition manager, and a driver, Abraham Gulung Werwer were carrying nutrition supplies to the western part of the county.

This brings the total number of humanitarian workers executed in South Sudan over the last two years to 16. In 2020 alone, nine aid workers were killed.

A total of 128 humanitarians, mostly South Sudanese, have so far lost their lives while providing humanitarian assistance to people since the conflict broke out in 2013.

These killings, assaults, and harassments have received significant condemnations from both the international community and local authorities.

However, none of the suspects from all these incidents have been arrested.

The Humanitarian Coordinator ad interim in South Sudan, Matthew Hollingworth urges the government to enforce law and order and guarantee the safety and security of aid workers.

He said the perpetrators of these violent acts must be brought swiftly to justice and be held accountable for their actions.

To protect their workers, some aid organizations were forced to temporarily suspend operations in Torit, Ganyiel, and Ruweng areas.

But the United Nations Office for the Coordination of Humanitarian Affairs said the attacks and consequent suspension of activities will have a serious impact on humanitarian operations in the area.

“Humanitarians who are working hard to provide much-needed assistance to people in need must be respected and protected,” Mr. Hollingworth stressed.

It is not clear why there have been increased attacks on aid workers, especially or clearly marked NGO vehicles.

But youths in Torit, Renk and JamJang previously wrote petitions demanding they be given jobs occupied by aid workers from other states.

The United Nations in South Sudan acknowledged the country’s serious youth unemployment problem due to the dire economic situation.

It stated its full support to recruitment practices that are based on competence, professionalism, integrity, and respect for diversity.

But the head of UNMISS described the approach of the youths as a “damaging development,” saying when humanitarians withdraw, “the losers are largely the young people who are the beneficiaries of a lot of the humanitarian services.”

Nicholas Haysom said he has raised the matter with the President, First Vice President, Minister of Interior, and the governors.

Heads of the diplomatic missions in South Sudan have described it as “appalling and unacceptable” attacks on humanitarian workers and aid operations in the country.

In a joint statement on May 28, the United Kingdom and the United States, Canada, France, Germany, Japan, the Netherlands, Norway, Sweden, Switzerland, and Turkey expressed serious concerns over the growing incidents.

” [The attacks] have put life-saving assistance and essential services in peril, disrupting aid delivery…for people already on the verge of catastrophe.”

The 11 countries – which are South Sudan’s largest humanitarian donors – reminded the government to uphold its “commitment to deliver on the peace agreement through actions that allow principled humanitarian response grounded in humanity, impartiality, neutrality, and independence.”

The United Nations humanitarian agency says the revitalized peace agreement signed two years ago has not changed the humanitarian situation in South Sudan.

“A total of 72 counties in the country still face extreme humanitarian needs while five are in severe need.”

This accounts for some 8.3 million people in South Sudan estimated to be in need of humanitarian assistance in 2021.

According to the UN OCHA, the implementation of the peace deal has not benefited the ordinary people.

It said South Sudan remained a protection crisis in 2020.

This is because the leaders have failed to restore durable peace and invest in basic services that encourage stability and sustainable development.